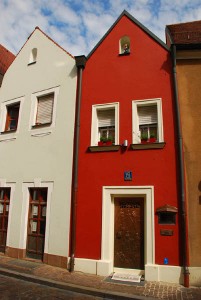 What do you do when you’re desperately in love and want to get married but the law won’t let you? Well, if you’re a creative man in Amberg, Germany you skirt the law by building a house in a tiny space, thereby becoming a legal homeowner afterwhich you can finally go to the town hall and tie the knot and make your bride happy. This all happened around 1728.

The “Little wedding house” or Eh’häusl as it is called in German is noted as the smallest hotel in the world. It’s not really a hotel, because it lacks a reception or even a receptionist. There are no services, no room service and none of the other trappings of a true hotel. But, it is incredibly romantic.

The little red house haas only 56 square meters (63 sq. ft.) and two rooms for rent. It was built between two neighboring houses by covering the alley in between them with a roof.

Since this strategy proved to be a successful one, the young couple decided that they would help other couples get married, too, by renting them one of the two rooms they had and after getting married they would leave. That explains the name of this unusual, yet unique hotel.