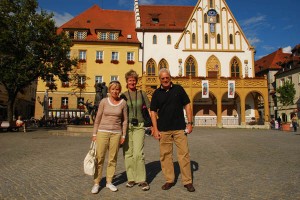 George Then’s father was born in Amberg, in the Oberpfaelzerwald of Bavaria, Germany. He met his future wife in Nuernberg, where they married. They had a son, and emigrated to America to begin new lives in 1927. George Then was born in America. He’d wanted to come to Germany for many years to see where his parents were born. Amberg was the first of the ancestral towns we visited, after a “getting over jet lag in style” tour through Rothenburg ob der Tauber, Schwangau, Munich and Berchtesgaden. By the time we reached Amberg, George and his wife Susan were completely adjusted to the time difference and ready for the experiences which waited for them in this lovely little town. 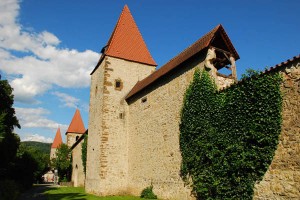 Our visit started with a tour of the town led by official tour guide Frau Schupmann, who took us for nearly 90 minutes down little lanes, into three gorgeous churches and to the former castle grounds. We learned the true meaning of “Badgasse,” for example. It was the place where you went to have your hair cut and your veins cut, a little releasing of the blood to relieve the stress of everyday life. You see, a barber was not just a barber, he was a doctor. We saw the tithe barn where citizens (including George’s ancestors) would have to bring their 10% of whatever they produced or grew as their tax to the local authority. The magnificent churches of Amberg spoke of a time when the citizens hoped to attract a bishop. Regensburg got that honor, but Amberg was left with churches that really have no place in a town this small or insignificant. (Later, when we were touring bigger, more “important” Nuernberg, the guide expressed amazement at first that we had spent 24 hours in Amberg. When we explained that it was an ancestral town, she got it. Otherwise, her expression seemed to be, “why bother?”) 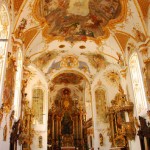 It was in Amberg that George and Susan had their first authentic German schnitzel. It was pronounced perfect, and thanks to Frau Schupmann for the recommendation. The beer was so good that we ended up going to the brewery where we met the brew master and bought a “to go” bottle to enjoy at our hotel later that evening. The next day, we returned to the brewery for lunch and a visit to their beverage shop where the friendly man running the place presented Susan with a souvenir mug, on the house, of course. Everyone’s family in Amberg. 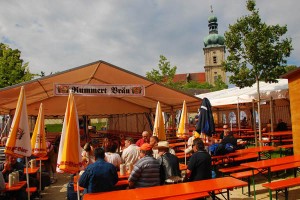 We left as the skies started to cloud over. We thought of the festival taking place on the hill where the 17th century Mariahilf church stands. The church was built during the Bubonic Plague of 1633 when townspeople were dropping dead in the streets. The people prayed to the Virgin for salvation, and they promised that if they were saved, they would built a magnificent church. That church is now the site of annual pilgrimages by the townspeople, and Saturday the 25th of June was a day of the 110th such consecutive march up the steep hill to the church. (Although we suspect by the car park that most people drove their BMWs or Mercedes) 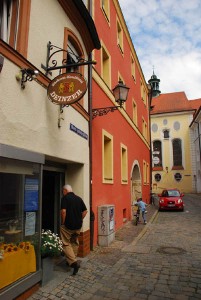 Amberg, Germany. A place which I’ve driven by many times while cruising from Prague back to Germany. Now I know where to stop for a schnitzel, a great beer, and if lucky, an accordion player in the market square.
Posted in Europe Tours, Family History Tours, Germany Tours and tagged amberg, germany.