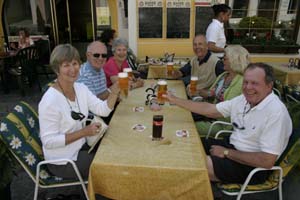 We left Budapest on a clear, warm morning. Getting out of the city on a Sunday early morning was a snap. We took the expressway into Austria and since it was nearing lunchtime, I suggested a stop in the little town of Melk. This was met with enthusiastic approval. The group I was escorting had made a stop in Melk on their river cruise but alas, it was too short to allow anyone time to explore the village center. We drove right in and parked near the end of the pedestrian zone. We found a restaurant with outside seating, right below the massive abbey. Schnitzels, salads, omelets and beer!