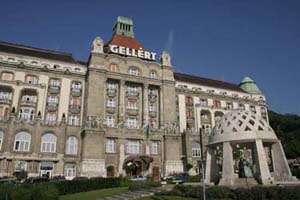 I’ve driven past Budapest once in the 1990s but never had the opportunity to explore the city before this year when I had the chance to pick up clients there following their river cruise. What an amazing city. European Focus Private Tours is going to add Budapest (actually two cities, Buda and Pest) to our itineraries. Beautiful architecture, a lively city, friendly people and a lovely setting on the Danube makes this one a jewel that needs to be seen to be believed. I stayed at the grand Hotel Danubius Gellert on the Buda side of the city. My first impression of the hotel was ‘wow,’ entering a spacious lobby that soared three stories up, stained glass on the wall of the winding stairway. A bellman took my duffel bag and escorted me to my room. It had to be the smallest room in the entire, sprawling hotel but I didn’t mind. I was only going to sleep there, not hold meetings with world leaders. I went exploring next, walking all over the property and admiring the baths, which are some of the best in Budapest. I arranged for a seat on the 4:30 to 6:30 open bus tour starting over in the Pest part of the city, then went strolling in that general direction. On the way, I ran into most of the members of the group that I would be meeting the next morning. After setting a time for our departure the next day, I continued to the meeting point for the tour, arriving in time to get a quick sandwich and a Pepsi for the ride. I had completely forgotten to eat since breakfast back in D?ºrnstein, Austria. The bus tour was great! Narrated in 16 languages I had a great view of the amazing architecture of the city as we cruised along broad avenues and narrow streets.
This is a wonderful way to see a city when you have limited time. I learned that Budapest has two hippos in their zoo, making this the northernmost zoo in Europe to be able to keep these exotic beasts.

That evening I walked back across the river as the sun set, intent on having a nice dinner. I was hooked into eating at a sidewalk restaurant that was somewhat full of tourists, all like me, having been coerced into eating there by a team of three very skilled ‘hookmen,’ who stand on the sidewalk and extoll the virtues of their restaurant to passersby. I fell into the trap mostly because I was hungry and did not want to stray too far from my hotel, my feet were tired! I ordered the local beer and the steak Budapest style. I make it a rule to drink the local beer wherever I go. Funny, but waiters will try to push a beer on you that comes from where they think you come from. I have never understood this. Anyway, after my second beer it was time to go. I asked for the bill, which was delivered handwritten on a scrap of paper. I was totally shocked. A beer costing 1200 florins?!? The same beer was 545 back at my luxurious hotel. (just over $3) I called the waiter over and we had a ‘discussion’ about this bill. I ended up paying the bill as is, with the exception of the bread, a 200 florin charge for this which I did not even touch. I then took my revenge on the dishonest waiter by walking 10 feet across the street to the neighboring cafe, which had no customers but still, three eager young waiters trying to capture passersby. I took a seat opposite where I had just eaten and ordered a beer, at 700 florins about half the price of across the way. Sipping on this beer I wondered why there was no one at the cafe where I now had settled. It dawned on me and I called the young girl over. ‘Let me talk to your boss,’ I said. She brought her boss over from a table in the corner. Boss Lady asked what I wanted, in a nice way, and I asked her if she had any idea why she had no customers. She said ‘No, tell me.’ I said ‘Your lights are too bright. No one wants to sit under these flourescent lights.’ She walked inside and cut them off and within three minutes she had four customers. A few minutes later, three more.
Now completely satisfied with my revenge on the overcharging restaurant across the way, I settled in for beer number 4 (these were small beers!) and watched as the cafe filled to near capacity.