What  do you do when you are really, really, really sure that your competition is claiming to be the ‘Oldest’ at something, and yet, you are certain that YOU are the oldest? In Germany, if you’re in the bratwurst business, you take that person to court.

That’s what happened (no kidding) in Germany some years ago, when the competing Zum Guldenen Stern in Nurnberg and the Historisches Bratwurst Kuche in Regensburg, both in the normally congenial state of Bavaria, battled it out in the highest court in the land, located in Karlsruhe. The very wise judges decided (in order to maintain peace and bratwurst in the land) that the kitchen in Nurnberg could bill itself as the ‘Oldest Sausage Kitchen’ in Germany while the one in Regensburg, built around the same time (1400) could call itself the ‘Oldest Sausage Kitchen.’ Did you catch the difference?

The real difference is in the taste. Some prefer the smoky flavor of the little finger-sized brats along the bank of the Donau River which passes through the nearby historic stone bridge in Regensburg. Some prefer their kraut and sweet mustard. Others like the atmosphere of Zum Guldenen Stern in Nurnberg, with its low ceilings, open fireplace, copper pots and rugged tables. One can easily imagine local personality Albrecht Durer eating here. His portrait hangs on a wall. Oddly enough, his fingers are in the perfect position for holding one of the brats served by the thousands here every day. 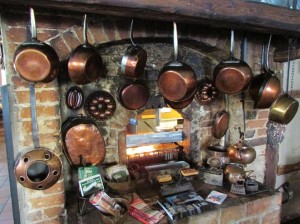 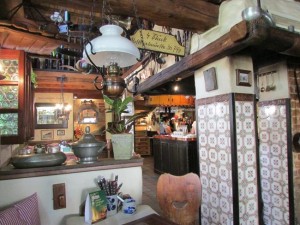 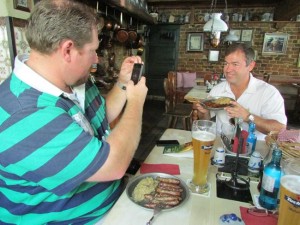