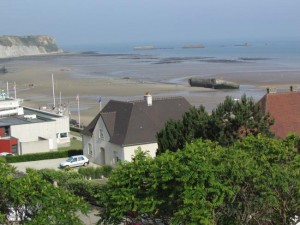 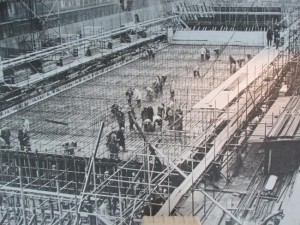 The gigantic blocks being assembled in England. They were towed into place across the English Channel, then sunk. 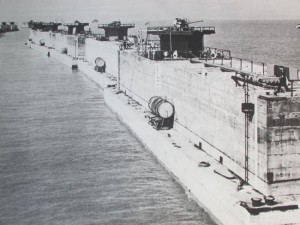 The artificial harbor was the brainchild of Winston Churchhill. To see the remains of this formidable protective harbor, constructed in just a matter of days after the June 6, 1944 landings, takes ones breath away on the first viewing. You enter the quaint seaside village, and there they are, hulking concrete blocks larger than houses out in the sea, forming a ring about 1,000 yards off the beach. Massive blocks litter part of the beach, part of the road which once transported trucks, tanks and men in the days following the invasion. Engineers were working on this harbor while artillery fire boomed in the countryside just a few miles from the beaches, right after the start of the invasion.

The Mulberry Harbor was built by  sinking huge artificial jetties into the shallow waters off Arromandes-les-Bains. Another Mulberry Harbor was planned for Omaha Beach, but a storm destroyed most of it before it could be used. The one at Arromanches was the one that proved the most effective.

An excellent museum, the first D-day museum established after the war, tells the story of this magnificent engineering feat and the men who pulled it off.

Even before the disastrous Dieppe raid, Churchill had started casting around for alternative solutions to capturing a port to supply the ground forces. As early as May 30th 1942, some 3 months prior to Dieppe, he sent a now famous memo to Lord Louis Mountbatten about the construction of floating pierheads: “They must float up and down with tide. The anchor problem must be mastered. Let me have the best solution.”
The Dieppe raid subsequently confirmed his remarkable intuition: if the ports needed for an invasion could not be captured, then they would have to be built.
The various components would be constructed in Britain, towed across the Channel and assembled off the Normandy coast.

The Mulberries comprised floating roadways and pierheads which went up and down with the tide.

In order to avoid rough seas, huge hollow concrete blocks and old hulks were sunk in order to form a breakwater.

The task of manufacturing all these components was undertaken by the British, whose war industry was already in overstretched. And yet in less than 9 months, the British had completed the work. Huge quantities of raw materials were used and tens of thousands of men were involved in this massive scheme.

Arromanches was liberated in the evening of June 6th and the very next day the first ships were scuttled. June 8th saw the submersion of the first Phoenix caissons and June 14th the unloading of the first cargoes. Totally operational by the beginning of July, the Mulberry Harbour in Arromanches was to prove its worth during Montgomery’s large-scale offensive against Caen later that month. During its busiest week, more than 18,000 tonnes of goods were unloaded each day.

The remains of the artificial port can still be seen off Arromanches and several dozen PHOENIX caissons continue to provide a calm and sheltered stretch of water. A true feat of engineering, the port at Arromanches provided the key to victory in Europe.