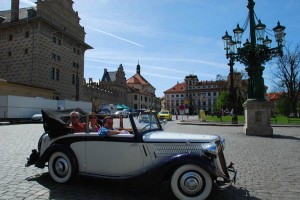 Dick and Darlene Muth, James Derheim in the Praha Lady, built in 1938. Photo by our driver and guide, Jerry.

We took a guided tour the other day in Prague with our driver Jerry and his very special lady. The “Praha Lady” is truly one of a kind, built in 1938 and in pristine condition thanks to a very particular owner who usually keeps this treasure safely in his garage. However, due to a temporary shortage of cars for the tourist trade, the Praha Lady was let out of her stable and allowed to roam around the city once more, as she has been doing for 80 years. Many probably don’t realize this, but before WWII the Czech Republic was one of the leading manufacturers of automobiles in Europe. The war decimated this thriving industry.

The Praha Lady was for its time one of the most expensive machines ever built. Only the very wealthy could afford her. She cost the equivalent of three years worth of wages for an average worker. A car similar to the one we rode in was owned by the wife of Reinhard Heidrich, one of the high-ranking Nazi officers who was an architect of the Holocaust and was in charge of the liquidation of the Jews from Prague and surrounding areas. (Assassinated in 1942 in Prague by a squad of 40 special forces soldiers sent from Slovakia and England).

Riding around Prague in this surprisingly comfortable car with the entertaining 29-year old “Jerry” behind the wheel was a highlight of our stay in this beautiful and historic city. The only bad part was when the tour ended at Prague Castle and we had to wave goodbye as Jerry motored off, downhill, thankfully, as the Praha Lady was riding on fumes.