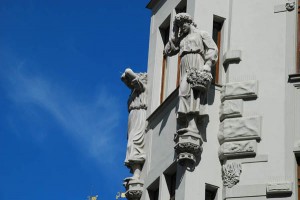 Everywhere you look in the Siroka district of downtown Prague you see another "oh my": architectural detail

It’s just amazing how gorgeous and interesting an ancient European capital city can be as long as it is not bombed to smithereens every fifty years or so.

Prague is a city which survived World War II and the immense destructive power of aerial bombardment totally unscathed. The result is block after block, building after building of architectural treasures from the 12th through the 20th centuries. Particularly striking are the apartment houses built during Prague’s population explosion in the late 1800s into the early 1900s. These are not just your normal apartment houses. They are masterpieces of architectural style and pomp. Massive in their proportions, they also include fun details such as the Three Muskateers jauntily perched atop one such house or the immense sea creatures holding up the lower balcony above the entrance to another. 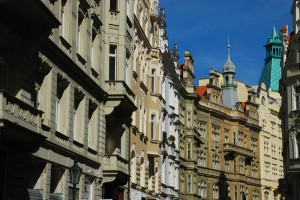 When I first visited Prague in 1993 these apartment buildings were gray and dirty and not very well taken care of. Plaster was flaking off in huge sections and the overall appearance was of neglect. With tourism and the hard currency it brought, Prague’s city fathers invested in sprucing up their city and it shows. Now, it’s hard to find a house or building which has not been totally spiffed up.

One of the best places to see an abundance of such architecture is the Siroka district which is also adjacent to the ancient Jewish neighborhood. Surprisingly, the ancient synagogues were not destroyed as was the case is so many other cities taken over by the Nazis in World War II. We were told recently, “Hitler liked the architecture, so they stayed.” I guess that even a monster can be moved by plaster and stucco done artfully. 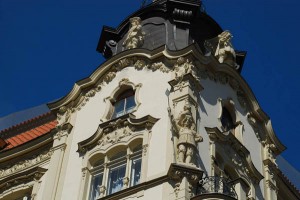