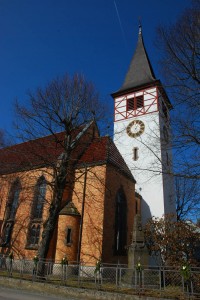 St. Gallus Protestant Church in Willmandingen, Baden-Wuerttemberg, Germany. The church was built onto a tower from the early 1200s. The rest of the church dates from 1903.

The church of St. Gallus in Willmandingen dates back to at least 1220. That’s when scientists determined the paintings in the tiny chapel on the ground floor of the tower were created. Those paintings, depicting scenes from the life of Jesus, were whitewashed over in the 1500s soon after the church was converted to Protestant in 1545. That act, which may seem to be sort of crazy to modern family historians, actually helped preserve and protect these precious paintings for posterity. A slow and expensive process to uncover the paintings and bring them back to their full color is underway. 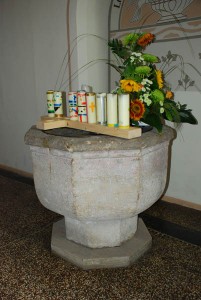 A 14th century font carved from a single stone is still used today.

The church is named for St. Gallen, a saint and also a town in Switzerland. The lands around Willmandingen were owned by the monastery in St. Gallen. When the church was converted to Evangelical-Lutheran in 1545 the name St. Gallus remained. 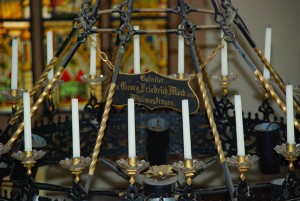 Lit at Christmas time, this lantern was given to the parish by an emigrant who succeeded in America. The farmer, surname Mock (Moeck) lived in Oregon at the time of the donation. The name Mock (Moeck) is widespread in Willmandingen.

The church features a beautiful stained glass window dedicated to the family of a pastor who served here around the time when the church was enlarged and rebuilt in 1903. A reminder of the past stands nearby. A massive, heavy baptismal font dating back to the 1300s was found in the forest in a nearby village. This was again typical of the times when old reminders of the pre-Reformation times were discarded. The font, big enough to submerse a newborn or small child, is being used today in up-to-date baptismal ceremonies. 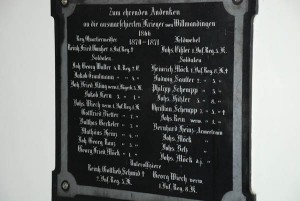 A huge organ fills the rear balcony. The organ dates from the time the church was rebuilt. Frequent concerts are held in the church.
We climbed up into the tower where we saw three bells, all dating from the time after World War II. The original bells were unfortunately melted down to use in the war effort. An old clock works stands silent. The clocks on the sides of the tower are now electrically operated. One of the cousins told us that he used to have to climb the tower to ring the bells each hour and to wind the clock on a daily basis. He searched and found his name, scratched into the wood more than 60 years ago. 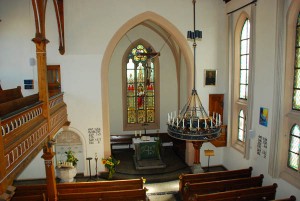 The church from the rear balcony