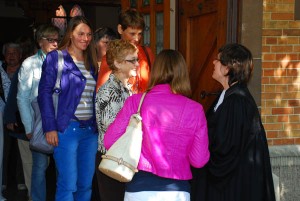 Pastor Rahlenbeck greets those who came to church on Sunday, September 16. Two of those were American descendants of a man who left Willmandingen more than 140 years previously.

A trip revolving around family history depends on connections made. One of those connections was made with the pastor of the church in tiny Willmandingen, Germany.

A letter sent to the pastor’s office by Beth Renney from Fresno, California reached across the miles and the years, resulting in a boisterous family reunion with cousins in the Schwaebische Alb. Some of those cousins had not seen each other for more than 20 years, even though they live in the same town. 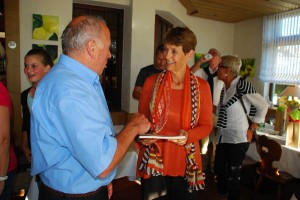 Eric Wiech hands Suzanne Pellegrino of Pittsburgh a book printed on the 1200th birthday of the village in 1972.

Pastor Rahlenbeck received Beth’s letter around the 20th of August. After more than a year of planning, it was this letter that touched off a storm of communication between a relative in Willmandingen through another English-speaking relative named Birgit Wiech. In these small towns, it seems as though everyone is related. Those exact connections may be hard to grasp for the outsider, but they’re there. We saw those connections up close during a “coffee and cake” meeting on the 16th of September at a hotel in Willmandingen. 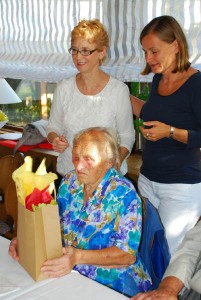 Beth Renney of Fresno, left, with cousins Birgit Wiech and 92-year young Anna at the family reunion. Beth had just presented a gift of California pistachios.

Birgit had organized a private lunch at our hotel in the nearby village of Erpfingen. After this getting to know you time, (it was actually a warm up for what was to come) we made our way over to the hotel for what can only be described as a very active meeting. It seemed as though everyone was talking at the same time. And, most of them in the unique dialect known as Schwaebisch, which is incomprehensible to all but those who grew up with the language. Thank goodness for Birgit and her daughter Nicole, who acted as translators. 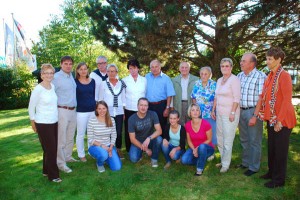 Photos were shared, stories told, and connections made. A highlight of the visit was when Beth and her sister Suzanne brought out a map of the United States to show the Germans, some of whom never leave their home town area, the huge distances between where Suzanne lives near Pittsburgh and where her sister lives in Fresno. To see the state of Arizona and to realize that Germany would fit inside of its borders truly boggles the mind and makes one speechless. Well, with this group, at least quiet for a couple of seconds.
Posted in Family History Tours and tagged ancestral, family, germany, history, private, tour, tours, Willmandingen.