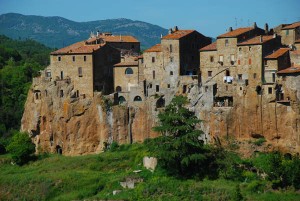 Pittigliano, Tuscany seen from the west

There was once a flourishing Jewish community in this fortified Tuscan village. Kicked out of the Papal States (those areas immediately surrounding Rome) by Popes in the 16th century, a large settlement developed in Pittigliano where they were given protection by the local ruling family. In ‘Little Jerusalem’ there can be seen many traces of their existence, including a ritual bath, a kosher butchery, bakery, dye house where textiles were prepared and perhaps most importantly, the rebuilt synagogue. 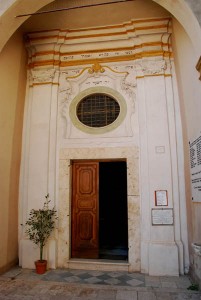 Entrance to the restored synagogue

Built at the end of the 1500s, the synagogue once stood on an outcrop of the tufa stone hanging over the southwest wall of the town. The Jewish population of Italy had been granted legal emancipation after Italy was united in 1871. By the 1930s, many had left this little town for better opportunities in the cities. With facism, their rights were suppressed and many who could left for other countries. A few were deported. After the war, there were only a handful left. The synagogue, abandoned after the tumult of World War II, had been destroyed by landslides in the 1960s. It stood as a ruin for many years. Finally, in 1995, it was rebuilt by the town government using recollections from surviving members of the community, drawings and photographs. 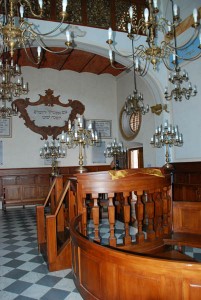 A small entry fee allows one to wander through the subterranean chambers where animals were butchered by having their throats slit with a knife. Blood ran down a steep decline and through a hole in the wall to the valley below. Textiles were soaked in tubs cut out of the rock. Wine was produced in a kosher cellar. Bread was baked in an oven which looks as it it is ready to use today. 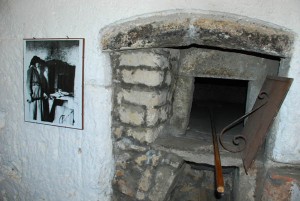 Pittigliano, ‘Little Jerusalem,’ a new discovery for European Focus but one which we shall return to again and again. 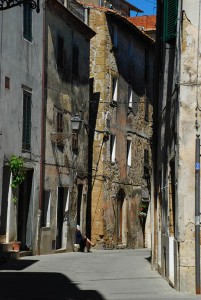