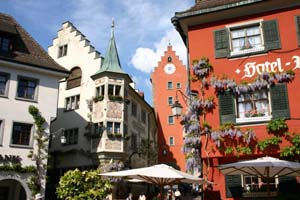 Meersburg, Germany is one of the stops on this fantastic adventure

Some of our favorite places are waiting for you to fall in love with them, as we have over the years. While August, 2008 seems like a long way off, the truth is that in 2007 more than half of the trips we’re leading were booked in early 2006 or late 2005. For Early Birds who are ready to plan ahead, we can offer the following 10-day Bavarian Adventure:

Arrival in Frankfurt and overnight in Miltenberg am Main at Germany’s oldest Inn.
Two nights in fabulous Rothenburg ob der Tauber
An overnight in Meersburg near Germany’s oldest castle
Two nights in Schwangau, near King Ludwig’s Neuschwanstein Castle
Three nights in Berchtesgaden at a luxury country hotel with a visit to Salzburg, birthplace of Mozart
Tour of the highlights of Munich and lunch in a typical old-style brewery restaurant
Last night in medieval Landshut, a short drive from the Munich Airport

Book now and take advantage of our special offer for August, 2008. Priced at just 3,665 Euro per person, all-inclusive except air. Four person minimum to qualify for this special price. Meals included as well as superior rooms in some of our favorite hotels and small inns. Deposit amount is $2,000. This tour offer expires on September 15, 2007.