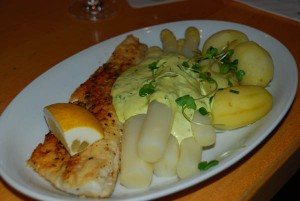 One of the pleasures of revisiting Germany is reconnecting with German food.  In the United States good German food is hard to find, at least where we live in New England, and it is usually a poor imitation of the real thing.  It’s a special pleasure to be in southern Germany in the spring.

Driving around in the countryside you see field after field of crops growing, sometimes the bright yellow rape, sometimes green and hard to identify this early, and sometimes spargel which is asparagus grown under long rows of white plastic covering so that the result is white and soft.  It needs to be peeled which is a lot of work.  When cooked properly it is delightfully tender and a bit sweet.  In Ulm I had a meal consisting almost entirely of spargel.

During this trip we have gone to several restaurants where I have had wonderful spaetzle, an egg noodle which is wonderful when cooked properly and served with a delicious sauce.  At home I have tried making it myself or buying dried, with poor results.  At a restaurant in an old mill I had the best brats ever, incredibly tender and tasty with a light sauce.  One noontime we just went into a metzgerei (butcher shop) where they had a little table where I sat and ate a delicious leberkase (sort of a ham loaf) and potato salad. 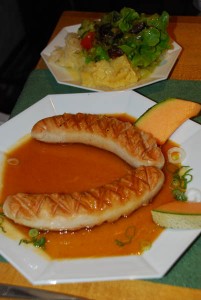 The salads here in the Kirchheim unter Teck area are interesting.  At first you only see a pile of lettuce of various  varieties with an oil and vinegar dressing.  Underneath are little collections of interesting things like shaved carrots or cabbage, tomatoes, or potato salad. 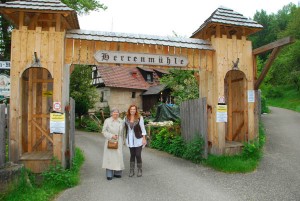 The author at left with Jenean Derheim, European Focus, at the Herrenmuehle