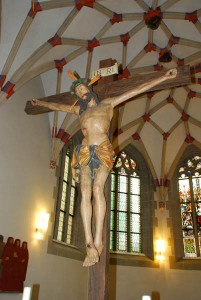 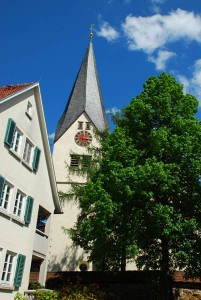 Out of the 27 different villages we have visited in the past eight days, one stands out as being particularly interesting. The tour we enjoyed the other day of the very old church of St. Michael in the village of Heiningen, located in a shallow valley in the rolling hills of the Schwaebische Alb northeast of Stuttgart.

The term “Biblio Publico” refers to paintings, statues and other objects to show those who could not read the stories of the Bible. The masterpieces of art that covered the walls of the church were like splashing huge pages of a comic book up on the walls for the 3rd grade education level of the people. Huge on one wall, St. Christopher. He’s bigger than life, and dominates the wall near an entrance. Why? Because obviously people in the 14th and 15th centuries had difficulties with child mortality and the death of the mother in childbirth. Over on another wall, a depiction of Christ on the cross, hands outreached with no sign of the nails and instead of a crown of thorns, a rainbow above his head. This is how Jesus was portrayed before the Spanish started showing him as the tortured Christ on the cross, bloodied and torn. Why the change? Politics. The Spanish wanted to remind the people of the evil deeds of the Jews. Flogging the Jews daily over their treatment of the Savior was one ideal way to get out of paying debts. The Jews held the title on people’s lives, their homes, their businesses. Remind the people of what evil people the Jews were, and it was easier to chase the banker out of your city, rather than repay the debt. 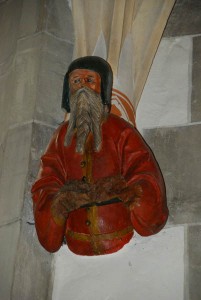 The architect created a statue of himself in the choir

We learned about the placement of various saints in the church. St. Michael Archangel is the patron saint of this and many other churches. Every time one sees a church named for this saint, one can assume that a pagan place of worship used to stand in that spot. St. Michael with his spear stabbing the heart of the dragon is the destroyer of pagan religions. Another saint is shown holding up the diamond-shaped choir, a “later” addition from the 15th century to this very old church. The people in this region had problems with rheumatoid arthritis  and their had hogs that came down with sickness. There’s a saint for that, too, and they are depicted in the ceiling of the church plus a wonderful bust of the architect in the choir. He used to hold plans in his hands, those have been lost due to one war or conflict among many.

A cemetery used to be located around the church. That cemetery was moved due to hygienic reasons to a location outside of town. But a stone reminder remains in the form of a small chameleon, easy to miss entirely if it were not pointed out to you. The chameleon, Pastor Wagner explained, represents the rebirth which would follow death. The room beyond the doorway where you find the chameleon used to hold the bodies of the deceased before they were moved out the side door to be buried. 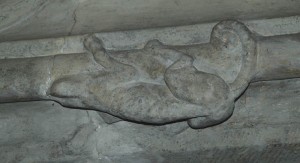 Finally, we learned that there are more than 1,000 ways to tell a story by the way a person is holding their hands in a painting. We saw one such painting, done around 1400, and the women are all holding their hands in slightly different ways. All of these tiny details in an ancient church, easily missed but for the excellent “Biblio Publico” in the mind of this kind, retired pastor who took his time to show us signs from the past. 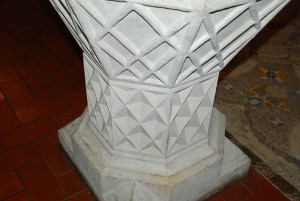 The 13th century font shows a three-sided triangle for the Holy Trinity and a four-sided triangle to represent the Four Elements of Fire, Air, Water and Earth