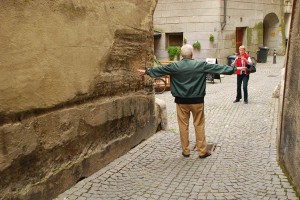 George Then found European Focus Private Tours by reading his issue of “German Life” magazine. Not quite a year later, he arrived in Frankfurt with his wife Susan to begin a 10-day Bavarian adventure including the homes of his parents, Amberg and Nurnberg. Along the way, we’re visiting Rothenburg ob der Tauber, Schwangau, Munich, Berchtesgaden and the Rhein Valley. Here’s George and Susan in the Steingasse, the narrowest and perhaps oldest lane in Salzburg, Austria on June 23. The scuff marks on the wall at left are from a tank which was being driven down Steingasse in 1945 by an American soldier heading for a destination down the lane. 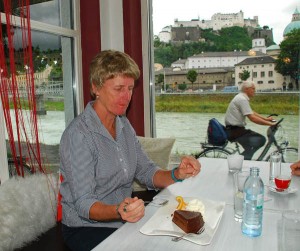 The last time Susan Then had a piece of Sacher Torte was about 40 years ago when she had a job at a bakery in New York state. She enjoys a piece in Salzburg.