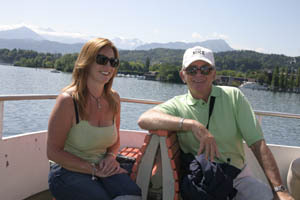 Our final day of this tour was spent lazily crossing the Vierwaldst?§ttersee (otherwise known as Lake Lucerne) via boat from Weggis over to Lucerne. A shot of our guest Dan Helpbringer and Jenean is above. It was a bright, sparkling day and practically cloudless. We crossed over and spent an hour wandering the nearly empty streets of Lucerne’s old town before having lunch at the Ratskeller Brewery near the bank of the Reuss River. The old Chapel Bridge was within sight. That bridge stood from the 1300s until 1993 unmolested by time or progess. Then, a drunken boater hit it, his gas tank exploded and 90% of the historic bridge went up in flames. The town tries to make light of it (some tour books even say it was rebuilt) but nothing is ever the same after a fire. Many of the precious paintings that decorated the crossbeams were lost forever. Copies are slowly being installed, thanks to the magic of digital imaging from the original negatives. A shot of the bridge from the western side is below. 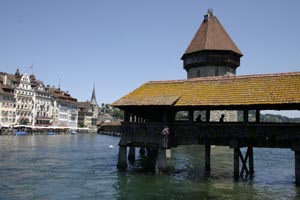