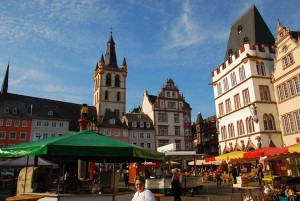 Trier has one of Germany's prettiest market squares

But not only that, it is one of Germany’s most interesting and most lively places. On a warm Saturday morning in late September, the city is full of daytrippers and locals and yes, a few tourists who come to enjoy the shopping, Roman ruins and beautiful architecture of the city once known as “Treverum” under the Caesars. 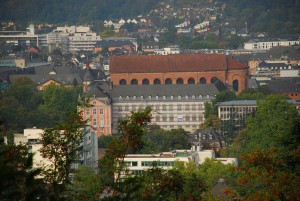 Trier is in the state of Rheinland-Pfalz, occupying a lovely position on the peaceful Mosel River. The borders of Luxembourg and France are just a hop away. The city is said to have been settled 1,300 years before the Romans came by Celts. That claim has never been officially proven. What is known, is that the Romans made Trier their regional capital after Emperor Diocletian split the empire into Western and Eastern halves in the early part of the 3rd century. This was an effort to gain control over the far-flung parts of the empire. It succeeded in part, giving the empire another 200 years before it finally collapsed under its own weight. 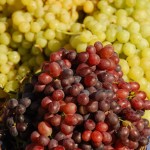 The Romans cultivated grapes here more than 1,900 years ago

Because Trier was such an important city, grand structures were built. Four massive town gates equal in size and grandeur to what one would find in Rome greeted the visitor, or protected the city against the “barbarians.” A huge palace complex for Helen, the mother of Constantine, Rome’s first Christian emperor. Extensive baths. A strong bridge over the Mosel which still carries traffic today. An amphitheater holding 20,000 spectators. A race track or “circus.” This could all be found around Trier’s grid pattern of residences, palaces and temples. Today, a resident of Trier can’t stick a shovel into the ground without hitting something Roman. (Therefore, most home renovations are held in secret behind the cover of tarps) 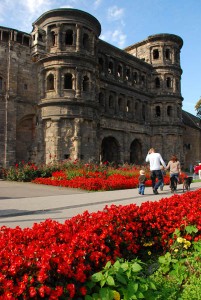 One of four city gates, and the only one to survive iron and stone plunderers because it was converted to a church in the middle ages. The Porta Nigra was then returned to its original state under Napolean.

On a sunny Saturday morning in September, to watch the world go by in the market place of Trier is a delight, and an experience not to be missed.
Posted in Germany Tours and tagged nigra, porta, romans, trier.