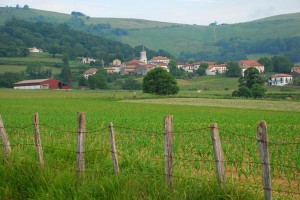 Countryside along the St. James Way

We arrived at this pretty riverside village late in the morning today and were immediately enchanted by the narrow medieval lanes, the old stone houses and of course, the bridge where the Camino Frances begins to make its way more than 700 kilometers later to the burial place of St. James in Santiago di Compostela, Spain. This is the entire reason for the trip, the fulfillment of a dream of our client’s to follow this ancient trail as much as possible through Europe. We’re not walking, of course, nor are we biking. Will we get some kind of prize for driving? It’s doubtful. But, it sure is easier and allows us to save our energy for strolling around lovely hamlets, taking pictures and staying in gorgeous inns, B&Bs and historic hotels. 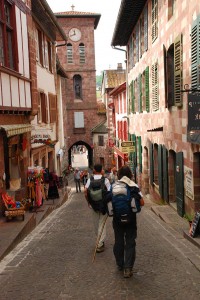 The original town at nearby Saint-Jean-le-Vieux was razed to the ground in 1177 by the troops of Richard the Lionheart after a siege. The Kings of Navarre refounded the town on its present site shortly afterwards.

The town was once a part of the Spanish province of Navarra and the Basque language is still spoken on both sides of the border and they still share similar traditions. We learned from our research that the Basque people are descendant from the Cro Magnon prehistoric people and that these people have been so isolated in the valleys of the Pyrenees that they have developed their own completely unique language unlike any other in the world. Our host from last night told us that a woman recently passed away who had the last knowledge of a dialect based entirely on whistling. “It is a tremendous loss for the world,” Francois told us. “No one wrote this language down or recorded it.” 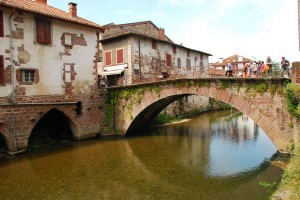 The bridge which starts the Camino Frances

The town has traditionally been an important point on the Way of St. James, the pilgrimage to Santiago de Compostela, as it stands at the base of the Roncevaux Pass across the Pyrenees. Pied-de-Port means ‘foot of the pass’ in Pyrenean French. The routes from Paris, Vézelay and Le Puy-en-Velay meet at Saint-Jean-Pied-de-Port and it was the pilgrims’ last stop before the arduous mountain crossing.

In 1998, the Porte St-Jacques (city gate) was added to the UNESCO World Heritage Sites as part of the sites along the Routes of Santiago de Compostela in France. 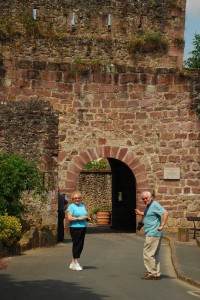 Our guests walking into St-Jean-Pied-de-Port through the St. Jacques Gate