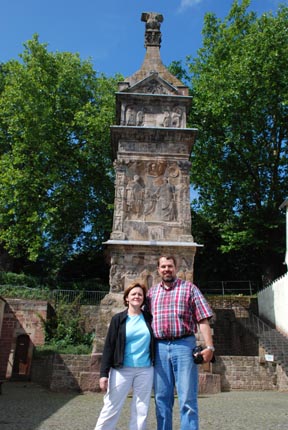 We’re traveling with the Harsh family in Germany this week. We started our adventure in the oldest city in Germany, former Augustus Treverus, founded in 16 BC under the Roman emperor Augustus. The city is a fascinating blend of ancient, not so ancient, medieval and modern. One of the landmarks of the area is the Igel Column, located just to the west of Trier in the village of Igel. The massive stone tower was an elaborate grave marker for a wealthy family of merchants. These markers were placed along the road so that travelers could appreciate how important and well-known the family was or is. Dave Harsh and his wife Cindy stand in front of this 2nd century marker.