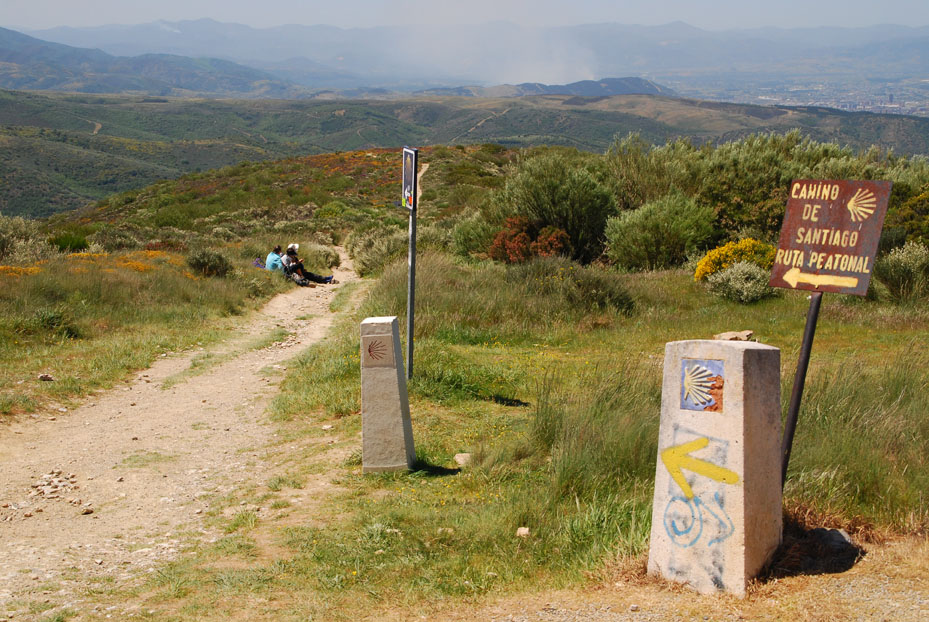 Walk where millions of pilgrims have walked before you on the beautiful Camino de Santiago.

Along the Camino de Santiago

Off the Beaten Track France & Spain

A wonderful trip for the true history buff. We delve deeply into the history of the pilgrimage route from France to far western Spain and the burial place of Saint James. We last did this trip with a couple in May, 2014.
Please note:With trips longer than 15 days we need to take half a day off every six days just to attend to personal business, our other businesses and just to take a breather, attend to any vehicle issues, etc. We will take these half days off in places where you can still do independent sightseeing, without the need for our escort or transportation.
Day 1: Arrival at Paris Charles de Gaulle International Airport
Chartres (2 nights) [1 hour, 5 min drive]James or Jenean will have stayed in close proximity to the airport on the night before.

After the approximate 1 1/2 –hour drive to Chartres, you will have the opportunity to freshen up, get lunch, walk around and rest. We have dinner together tonight (included). 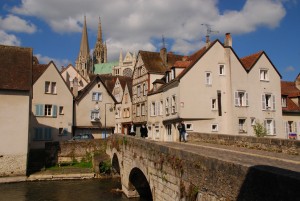 Day 2:
Chartres and area sightseeing
This day is devoted to visiting the cathedral and other pertinent sites of interest in Chartres.

We headquarter for the next two nights at an old mill that’s been converted into an inn in the bucolic and picturesque Vallée du Cousin. The Vallée du Cousin is located very near Vézelay and Abbaye de Fontenay as well as numerous historically significant villages in Burgundy. The smallish city of Avallon is perched above the valley.

Day 4:
Exploration of Vézelay and its cathedral, Abbaye de Fontenay and more of Burgundy as your interests dictate. We will plan it so that we have a late lunch, allowing you to skip dinner if you wish. As before, all of your lunches are included.

We get an earlier start today as we make our way to Le-Puy-en-Valey. Our objective here is to visit the cathedral.

Headquartering in one of France’s most beautiful villages for three nights puts us in a position to visit many of your requested sites and villages: Figeac, St. Foy, and Cahors.

We have a long drive today, but we should get another early start because it makes the most sense to visit Moissiac on the way to St-Jean-Pied-de-Port.

We stay the night in this charming village that is the meeting point of the Camino Francés.

Also along this route, we stop and visit the town of Puente de la Reina, where all Caminos from the west converge in Spain.

From the official tourist site, about Olite:

The sleek and harmonious silhouette of the Castle-Palace stands out against the skyline of Olite, a small town in the centre of Navarre just 42 kilometres south of Pamplona that was the seat of the Royal Court of the kingdom in the Middle Ages.

The thick walls and crenelated towers of the Palace were home to monarchs and princes. Declared a national monument in 1925, it is the best example of civil Gothic architecture in Navarre and one of the most notable in Europe.

A walk through the narrow streets of Olite will take you past noble stone houses with coats or arms on their facades and grandiose wooden eaves, mediaeval galleries and splendid churches, and the Roman wall surrounding the town.

Its Mediterranean climate has also made Olite a wine capital. Visit its bodegas (wineries) and try their wines. 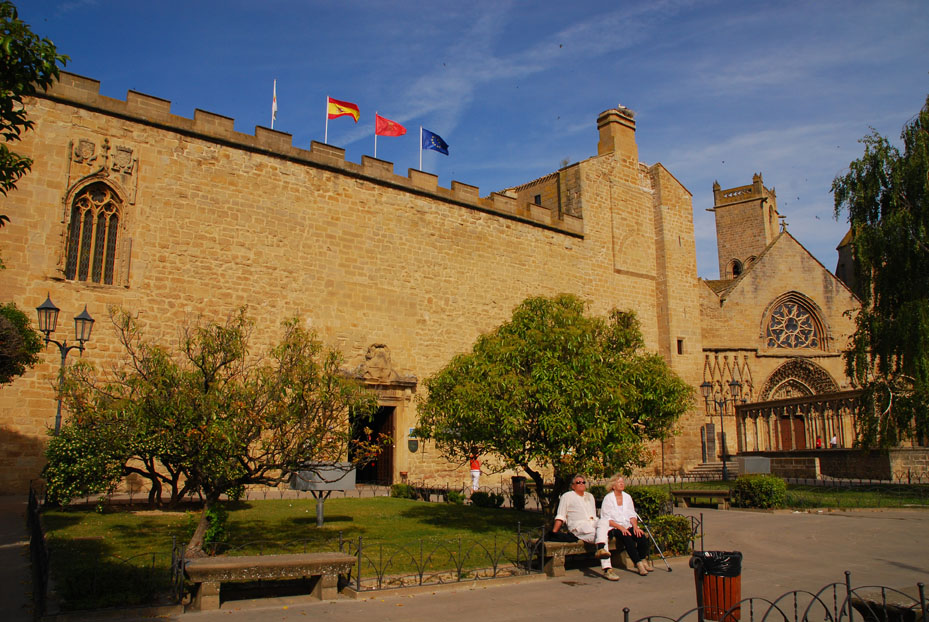 The Parador of Olite where we spend two nights

Day 11:
Exploration of Olite and environs, including Estella and Irache.

On our drive from Olite to Lerma, we can stop and visit both Najera and Cañas.

Lerma is another historic and charming town with another amazing parador. Located very close to Lerma are both Burgos and the Romanesque monastery of Santo Domingo de Silos dating from the 7th Century. The monastery is notable for a variety of reasons and also because it is the monks from this abbey that made Gregorian chant a worldwide best-seller.

We have plenty of time between destinations to stop and visit Romanesque sites and other places of interest along the way, as is the case for much of our drive across Spain.

While in this area it’s possible to:

Visit the town of Astorga, learning about the Maragatos people and then driving up into some of the high villages of the Bierzo where there is still the typical Maragatos architecture and places where they lived. In addition, the highest point of the Camino de Santiago is located up in these mountains. The scenery is stunning – you could almost think you’re in the Scottish Highlands

The UNESCO site of Las Medulas. Here is a some information about Las Medulas, taken from Wikipedia:

“Las Médulas is a historical site near the town of Ponferrada in the region of El Bierzo (province of León, Castile and León,Spain), which used to be the most important gold mine in the Roman Empire. Las Médulas Cultural Landscape is listed by the UNESCO as one of the World Heritage Sites.

The spectacular landscape of Las Médulas resulted from the Ruina Montium, a Roman mining technique described by Pliny the Elder in 77 AD. The technique employed was a type of hydraulic mining which involved undermining a mountain with large quantities of water. The water was supplied by inter-basin transfer. At least seven long aqueducts tapped the streams of the La Cabrera district (where the rainfall in the mountains is relatively high) at a range of altitudes. The same aqueducts were used to wash the extensive gold deposits. 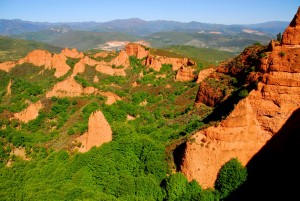 The incredible Las Medulas gold mine. The Romans blasted an entire mountain away in search of the precious metal.

The area Hispania Tarraconensis had been invaded in 25 BC by the emperor Augustus. Prior to the Roman conquest the indigenous inhabitants obtained gold from alluvial deposits. Large-scale production did not begin until the second half of the 1st century AD.

Dinner on all three nights included, as one of the owners is a chef and he makes incredible food, also healthy food. And, for the price he charges, it would be difficult to eat in a restaurant.

On our drive to Santiago, we can stop and visit Portomarin and the relocated church of St. Nicolas (San Juan). Exploration of Santiago

We stay in an isolated rural inn outside of Santiago about 20 minutes. The inn has panoramic views of the forest and hills and also serves a very nice evening meal, which we have included on both nights. We will likely join you on one of those evenings.

Day 18:
Exploration of Santiago and environs

Your Private Tour in France, Spain and Portugal

Note: With late lunches on some of those days when dinner is not included you will probably be well satisfied and will not want to have dinner, or at most, a light snack via room service or a nearby café

Total cost in Euro for two persons: 23,340
Deposit amount: 1,500 Euro per person sent by check to our office in Florida
Followed by one third of the balance due 90 days before your trip starts

Balance is due 14 days before trip start

It will be our pleasure to show you a wonderful time in France, Spain and Portugal. We can also put you in touch with the couple who took this tour with us in May, 2014.

Select “Along the Camino”