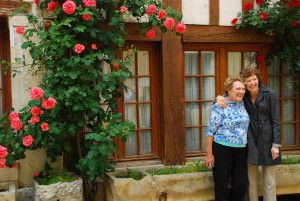 Charlotte Wethe and her daughter Diane Duffy in Noyers-sur-Serein

After lunch at Auberge de la Beursaudiere in nearby Nitry, Burgundy, we walked around the medieval town of Noyers-sur-Serein, a lovely assembly of half-timbered houses, cobblestoned streets, slate roofs and interesting and picturesque corners everywhere you turn. We love taking our guests to this special place. While well-known amongst the French, it is hardly on the American tourist agenda, tucked away in a valley alongside a peaceful river. Bus tours are drawn to other places in the region with larger parking lots and easier access. We love to explore the little places where the bus tours don’t go. 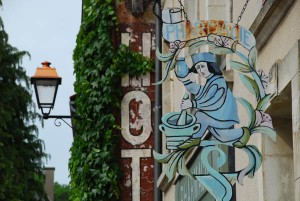 The old pharmacy and a brass lamp in the center 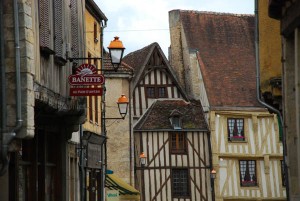 Houses from the early 1400s

Noyers-sur-Serein easily fits the bill as a charming village. Established more than 1,000 years ago, the village attained real power and significance in the 1300s when a massive castle was built above the village by the marshal Mile de Noyers and later by the Dukes of Burgundy. Always a wine-producing town, Noyers-sur-Serein features plenty of reminders of its rich past including grand houses with wood carvings, strong walls and towers and a medieval moat complete with an ancient communal washing house – all luxuries seven centuries ago. 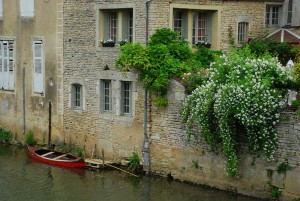 It is easy to imagine the fascinating past of France while wandering through off the beaten track villages and towns such as Noyers-sur-Serein.
Posted in France Tours and tagged burgundy, france, noyers, serein, sur.