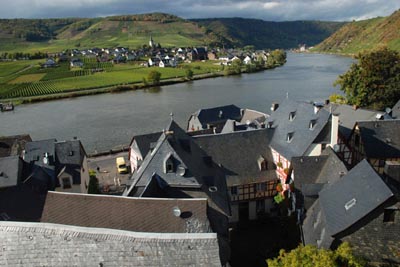 The view from the Kloster Cafe in Beilstein, Mosel River Valley

The Fox family came over for a tour including ancestral villages Hatten and Rittershofen in the Alsace, plus Allendorf and Niederlistingen in the state of Hessen, Germany. We also did some sightseeing “just for fun,” with stops in Bacharach on the Rhein, Rothenburg ob der Tauber, Miltenberg am Main and more. We were lucky with the weather, enjoying beautiful fall colors and mild temperatures and mostly clear skies throughout the 9-day journey. 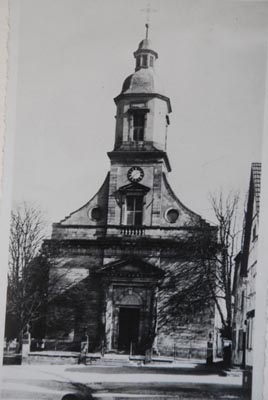 Hatten, Alsace in better days. The 18th century
church was devastated during a tank battle in
January, 1945.

The trip started with a visit to Hatten in the Alsace of France. The village was home to the Fuchs ancestors (Fox = Fuchs in German).
Lisa Fox had traced the ancestry back to this village and European Focus owner James Derheim had provided photographs to the family in 2000 in time for a large family reunion. Now the Fox family was there, in person, walking the streets and enjoying a visit to the town hall where we obtained copies of old photographs taken in Hatten before the destruction of World War II. We also had a private tour of the remnants of the Maginot Line in Hatten, thanks to a member of the society in charge of preservation who came and opened it specially for us on a day the complex is normally closed. All along the way, European Focus’ surrogates made sure that the Fox family had the very best and most fulfilling experience. 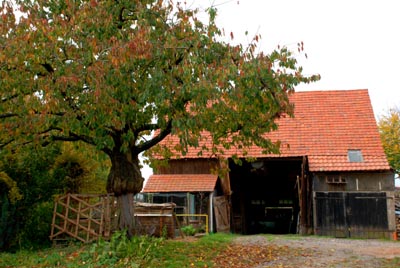 An old barn in Rittershofen, near Hatten

From the Alsace, we moved north into the Rheinland and a stay in our favorite hotel in tiny Bacharach. This medieval village has stood since the 10th century in a narrow gap leading down to the river from the high plains to the west. We used Bacharach as our home base while exploring the Rhein and Mosel Valleys. A highlight of our visit was a visit to the remains of the bridge at Remagen (scene of a famous battle in the last months of WWII) and a tour of Burg Eltz near Moselkern. Burg Eltz is in its 33rd generation of ownership by the von Eltz family. 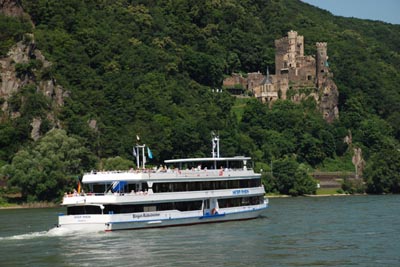 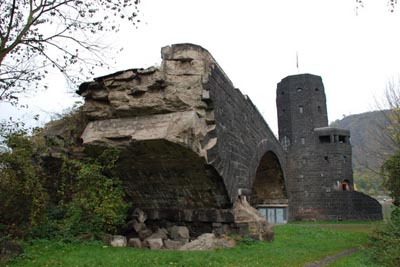 The ruins of the Remagen railway bridge.

From the Rhein, we continued north into the state of Hessen and a visit to the hamlet of Niederlistingen, where we had a fantastic session with two town historians who shed light and filled in some blanks in Lisa’s understanding of the family history there. It turned out that Herr Sauerland, one of those historians, is a cousin of Lisa’s! We had “kaffee und kuchen” at the home of the Sauerland family and then pored over historical materials for a couple of hours. Part of our visit included seeing the old inn where the Coester family had lived many generations ago. 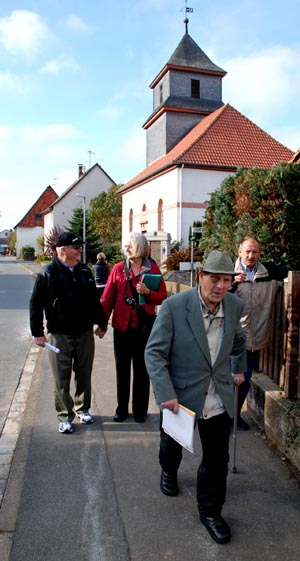 The next phase of our trip was to nearby Allendorf on der Werra, now known as Bad Sooden-Allendorf. We stayed two nights in a lovely country lodge with a panoramic view over Allendorf and the hills beyond, which we learned later was the dividing line between East and West Germany. In fact, the old border station including watch tower and “no man’s land” has been turned into an excellent museum, recalling the days not that long ago when someone trying to escape East Germany would be shot.

A private tour of the town with a local historian included as a highlight a climb up 200 stairs to the top of the 600-year old tower of the church of St. Crucius. The view, thanks to Mother Nature providing a crystal-clear day, was spectacular! 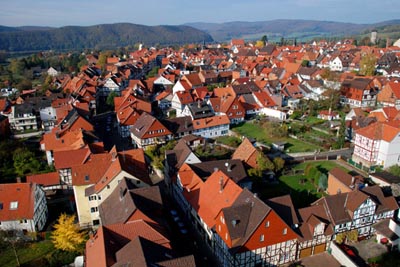 The view from the tower of the town church over Allendorf

After our experience in Allendorf it was time to head further south to the region near Fulda. We followed the Werra Valley and passed through one picturesque village and town after another all the way down to what is known in Germany as the Most Beautiful Baroque Town in Hessen. We toured around the center, visiting the 9th century chapel where the remains of St. Bonifatius once were kept in the ancient crypt. The little church proved to be too small for the many pilgrims who wanted to pray at this grave, so a large cathedral was built next door. There aren’t many 9th century churches in such remarkable condition left in Germany. 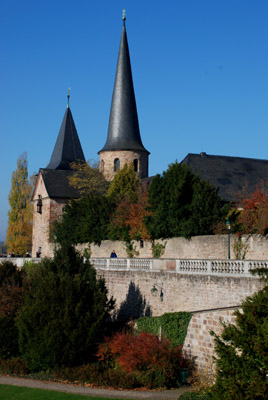 Carolingian chapel in Fulda, built in 822

We visited nearby Neuhof, where the Coester family lived. We found an old pharmacy owned by the Coester family which had been mentioned in a diary kept by one of Lisa’s relatives, who had visited the location in the 1980s. Finding that pharmacy was a real kick for all of us. That energy propelled us further south, to the medieval town of Rothenburg ob der Tauber, where the trip entered into its final phase with two nights and a full day of self-exploration and shopping. 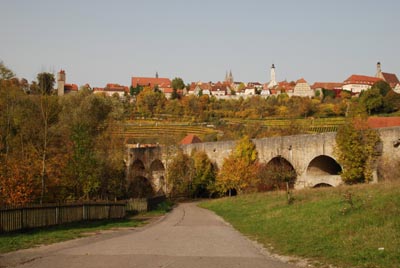 Rothenburg is a highlight for any trip to Germany

Thank you Lisa, Don, Susan and Robert for a great end to a memorable season! 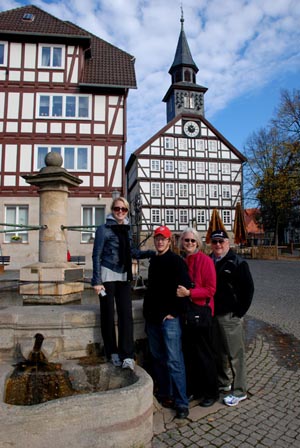