This morning a long-awaited journey finally started for Dolores (Braun) Petit, who has deep roots in Germany but who never had the chance to come due to hard feelings resulting from World War II. Her husband was a fighter in the French Resistance as a young teenager and his father was kept in a concentration camp. So, Germany was always off the table as a destination, although she has visited relatives in France several times. Now a widow, her journey began with arrival this morning at Frankfurt’s Airport after a ride on ‘the biggest airplane I have ever been on in my life.’ (A stretch 747 from Washington DC)
After a long day of rain the sun came out so that Dolores could enjoy the views as we traveled north to our overnight stop in Hannoverisches Münden, about two hours north of Frankfurt with a stop on the way for ‘Zweite Frühstuck,’ or second breakfast of a fresh plum tart with a tall latte macchiato at a bakery in Kirchheim, Hessen.

Her first cousin should have also been arriving today but illness prevented her from making the trip. (A testimonial to the value of Trip Insurance) 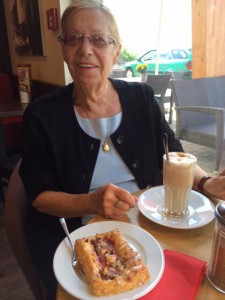 Dolores Petit has waited at least 50 years for this trip and today it started. We will be visiting cousins in the Steinfeld (Zeven) area as well as some tourist highlights on her Bucket List.