Dolores Petit is on the Trip of a Lifetime back to her roots in northern Germany. On the second day of her visit with relatives in the hamlet of Steinfeld, she suddenly came face to face with a woman whom she has never met. However, she gave that woman something so special, so important and yet so vital more than 67 years ago. She gave her a used dress.

That dress was in a care package sent by Dolores’ grandparents to relatives in Steinfeld in the hard years after the end of World War II. The relatives had no young girls at the time, and so they gave the dress donated by a 9 year-old Dolores to their neighbor’s daughter. That little girl, now all grown up, came to thank Dolores in the home of Fritz and Ursela Schmätjen.

Gerlinda Schwelgin remembers clearly the impact that this dress had on her growing up years in a country that was short on everything. She wore it to school in the warmer months, and a second garment she called a ‘uniform,’ also from Dolores, to school and special events in the cooler months. Tears were shed at the happy reunion. Hands were clasped and they did not want to let each other go.

To insert the writer into this little story for a moment. I have witnessed countless family reunions over the past 25 years, but this was absolutely the most heartwarming meeting. There was not a dry eye in the house and the lump in my throat appears whenever I think of this exceptional meeting. 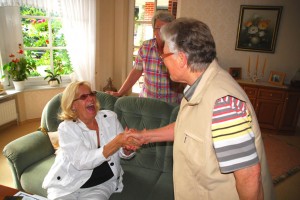 Dolores Petit, left, meets Gerlinda Schwelgin for the first time. A dress donated by Dolores’ family in the hard years after World War II made a huge impact on Gerlinda and she came to thank Dolores. 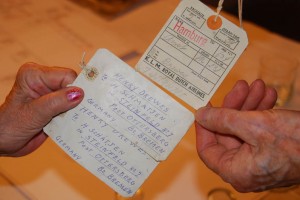 The address labels from one of the care packages has been kept all of this time by the Schmältjen family. 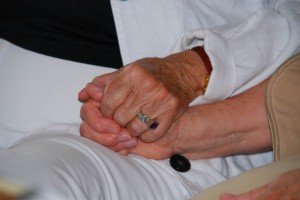 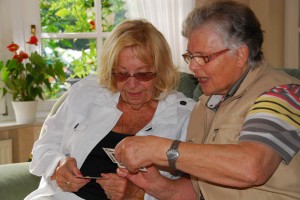