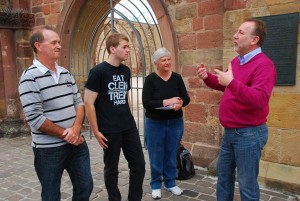 Gerhard Nestler, right, explains the history of the town to the

Paul Skelton wanted to see where his German ancestors lived before emigrating to Australia. And so, as part of an extended multiple week long trip that also included England and Ireland, Paul and his wife Rhonda and their son Andrew booked a short week-long tour with European Focus which revolved around a visit to the town of Frankenthal in Rheinland Pfalz, Germany.

As part of the preparations for the visit of the Skelton Family to Frankenthal, European Focus owner and leader of most of our genealogy trips James Derheim made a trip to Frankenthal in early September, 2012 while in the area on other business. Contact was made with Gerhard Nestler, who works for the town. Through Herr Nestler, the Skeltons were able to learn much more about their ancestral origins in Germany.

We enjoyed a walking tour lasting nearly two hours on a bright and sunny April 17. Herr Nestler met us in front of the Rathaus, or town hall, where he works. We learned much of the history of Frankenthal. 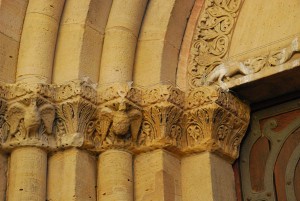 We learned that the town has its origins in the founding of a monastery by Erkenber, who lived in nearby Worms. A monastery was already established in Worms, but Erkenber wanted to spend some of his fortune establishing a  new one on lands he owned to the south. That monastery was built and filled with monks, some of whom were engaged in the illumination of manuscripts.

The monastery thrived. A second one, for nuns, was established on the south side of the village. Craftspeople arrived, along with farmers who all worked for the monastery on the surrounding lands. The land was fertile and fed by the Rhein, which at that time ran right past the village and monastery. Today the course of the river runs ten kilometers to the east

Fast-forward to the 1500s. The Protestant Reformation came to this region and the monastery was emptied of its monks. A huge property, valuable, was gathering cobwebs. The owner, descendent of the founder, wanted to fill it with people. And so, he welcomed refugees from the Netherlands. Some of those people who had to move for religious reasons found homes in the monastery buldings. Among those people, the Skeltons now believe, were their Behagel ancestors.

Another 125 years or so later and the War of the Palatine Succession of 1689 destroys Frankenthal along with nearby Worms, Mannheim and Heidelberg by the French. The village of Frankenthal is nearly empty. All Dutch influence ends at this time. When the town is rebuilt the monastery buildings are absorbed into new uses. 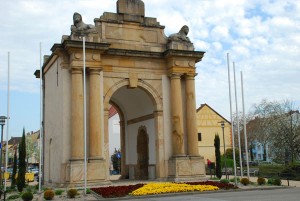 The Speyer Gate from the late 1700s

A second destruction of the town takes place in 1943 during the Second World War. Airplanes bound for the chemical factories at Ludwigshafen follow flares dropped by scout planes but the problem is, the flares were dropped too early due to heavy flak from Mannheim. Bombs are dropped on little Frankenthal, which has no military significance. The town center is destroyed and 32 people lose their lives. It’s another tragedy in a world war full of millions of them.

Even with all of this destruction, Herr Nestler was able to show us many remnants of the past. We saw remains of the old port and waterway which once led to the old sugar factory. We saw two town gates from the fortifications erected in the 1700s. And of course, we saw remains of the walls and west portal of the monastery from the late 12th century.

More about Frankenthal can be learned on the Wikipedia web site, which is in English. 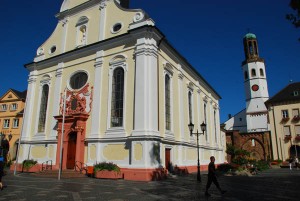 Holy Trinity and St. Louis churches were rebuilt after WWII