Sisters Jennifer and Christina are exploring part of Southwestern Germany on our popular ‘Castles, Country Inns and Historic Guesthouses Tour’ which includes stays in some of the most unique villages and small towns we know in this region. The two young Canadians just experienced a night in Germany’s oldest hotel, built in 1590. 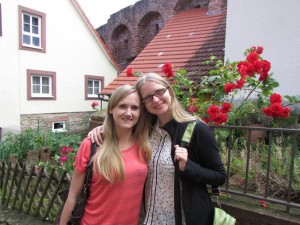 Miltenberg lies in a narrow plain between a high sandstone cliff and the Main River. Flooded many times in its long history, the local prince declared in 1622 that all houses must be raised on solid, stone foundations to avoid the constant rotting and therefore necessary replacement of ground floor levels. That is why, in some houses, you see a date of construction of 1622 below a date of construction of an earlier date.

A stay in one of those grand houses, built in the 1200s with a solid foundation, is always a highlight for guests of European Focus. The ‘Riesen,’ or Giant, has been a hotel for the princes, bishops and emperors of Europe since the 12th century. It is documented that Emperor Karl IV stayed here in 1338. Martin Luther stayed here as he fled from his trial in Worms. Our guests Christina and Jennifer had the room named for Karl IV, with a splendid view over the town and the castle beyond.

Miltenberg is loaded with half-timbered houses. A custom in the old days was to cover the timber with plaster, thereby giving the impression to those who didn’t know  better that your house was built of solid stone. A phrase from that time, ‘Stein Reich,’ or stone rich, reminds us today of how valuable it was to have solid building blocks. 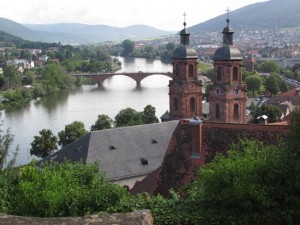 The view over the Main River and twin towers of St. Jakob Church 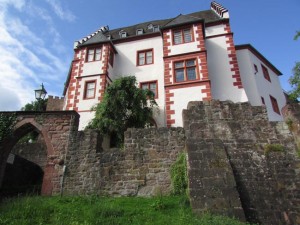 Mildenburg Castle was built on top of a former Roman castle 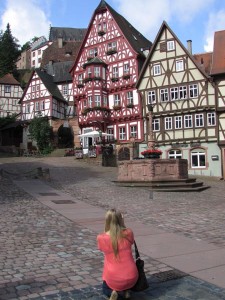 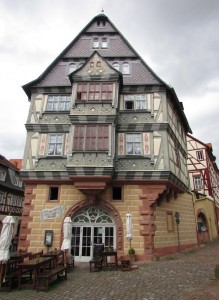 The venerable Riesen hotel, in use as a lodge for the privileged since 1590 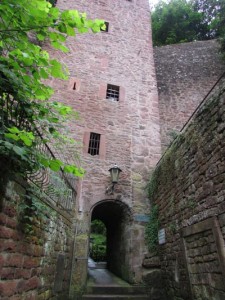 The tower which marks the end of the town and the beginning of the castle district. A steady cool breeze comes through the woods, giving it a unique name of ‘Schnatterloch,’ or chattering lane.