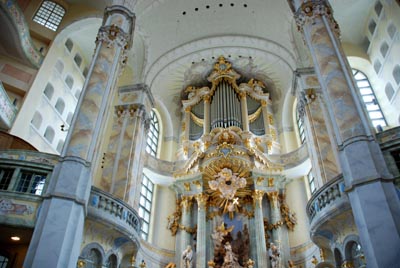 Interior of the Frauenkirche, rededicated in October, 2005

The Frauenkirche is once again part of the magnificent skyline of Germany’s most impressive baroque city. Once known as the “Paris on the Elbe” because of its incredible array of mansions, churches and public buildings, the city was mercilessly bombed by American and English air forces in mid-February, 1945 near the end of World War II. Some describe this bombing (650,000 incendiary bombs fell on the city center, which had absolutely no value as a military target and which in fact was a city full of refugees) as retribution for the German bombing of the cathedral and city of Coventry, England. A real “tit for tat” with 35,000 dead as a result. Walking around the newly reconstructed Frauenkirche, which uses as many of the old original stones as possible (they’re easy to pick our because they are gray compared to the new ones, which are pale yellow) it is easy to feel deep anger at the utter uselessness of war and the incredible waste in human and material terms. When will we ever learn? Hope returns when you walk into the spacious, bright interior of the Frauenkirche. The church is faithful to the original in every way. Even the magnificent altarpiece was painstakingly reconstructed, using detailed photos taken shortly before the city was leveled. The entire city benefits from the Frauenkirche’s rebirth. Swank hotels, cafes and shops are springing up all around the church. Thank goodness the city planners are following the original design and layout of this part of the city, ordering architects of these new structures to follow the old shapes and sizes of the buildings that were lost due to the firebombing. The city has a new vibrancy, a new energy, a brighter future. Those who advocate war need to come here and see a city that is still rebuilding after the last big one which swept across Europe.