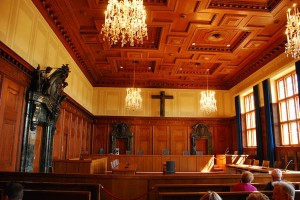 The new museum dedicated to the trials following the end of World War II is a new “must see” in Nurnberg. The room known as “Courtroom 600” is where the trials were held, and it has been preserved in pretty much its original form, other than a rearrangement of the docks and the place for the judges which was once against the tall windows on the south side of the room. The crucifix shown in this image was not there when the trials were being held. The Memoriam of the Nurnberg Process museum is open Wednesday through Sunday. The courtroom where the trials were held is still being used for criminal cases, therefore, a viewing is not always guaranteed.
Posted in Europe Tours, Undiscovered Places and tagged 600, courtroom, nurnberg, process.