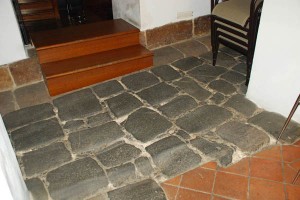 Wheel ruts can still be seen in the stones from this bridge built in 1158 - 72. It was washed away by a huge flood.

The Charles Bridge has spanned the Vltava River in the heart of Prague for more than 650 years. Before this mammoth structure was built under the reign of Charles IV, there was the 12th century “Judith Bridge,” which was actually longer than the present-day bridge. A fragment of this fascinating piece of history can be seen in a hotel lobby on the west end of the bridge. (Just look for the signs)
Posted in Europe Tours, Undiscovered Places.