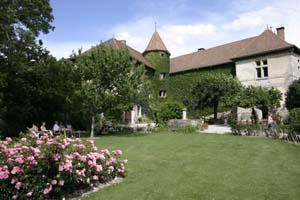 It was only for a night, but we doubt any of our guests will ever forget their evening at Chateau Paquier, located outside the hamlet of Saint Martin de la Cluze, near Grenoble, France. We were on our way from Les-Baux-de-Provence, taking the quick route to Grenoble on a day that started out rainy and slowly turned beautiful. By the time we were halfway there, the sun had taken over the day and we were all able to fully enjoy the spectacular scenery as the Alps unfolded in front of us. Jenean and I had discovered the Chateau Paquier in July, 2006 during a scouting trip to this area. We were excited to bring our eight guests to this oasis of peace and quiet. We had five of the six bedrooms in the chateau, which was built in the 17th century. A section of the grand house dates back to the 12th century. Tom and Kathleen had the bedroom in that part of the house. The ceiling in that room looks like it could have been the ceiling of a chapel. After a lazy few hours of relaxing in the garden or walking about the property and the extensive gardens, we met in the grand dining room where Jacques Rossi had started a roaring fire. A leg of lamb was slowly turning on the wind-up spit. We all sat around and basked in the warmth of the fire, watching dinner being prepared. Charlotte Rossi and her mother Helene soon appeared with snacks and an assortment of homemade wines. The Rossis have a hectare of vines near the sea, and they make white and red table wine from these grapes. They also make fascinating orange, blackberry, boisenberry and even walnut wine. We sipped on the apertif of our choice and watched as the lamb finished roasting. Then dinner was served. We dined on warm goats cheese on top of fresh greens from the garden. The lamb followed, along with potatoes spiced with garlic and lush tomatoes, sliced in half and covered in Helene’s secret ingredients. Dessert was a sinful assortment of cakes laden with berries. Breakfast was just as decadent, with tiny crepes served with homemade jams, soft-boiled eggs and plenty of coffee to start our day. We left Chateau Paquier after pictures with this wonderful family. Who knows? Maybe most of us will return someday to this little spot of heaven. 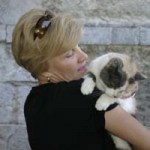