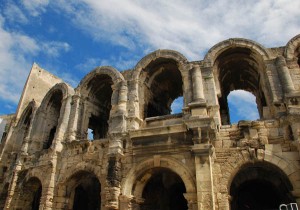 One of the largest concentrations of the ruins of the Roman Empire in France can be found in Arles. From a long bridge leading into the city over the marshes to an amphitheater, large theater complex and a portion of the Roman Forum plus other ruins make this a destination not just for lovers of Roman architecture and history, but for those who appreciate the history of Vincent van Gogh, who spent a considerable portion of his life here. Strolling around Arles today as the sun was breaking through the overcast and the beautiful blue sky appeared through the arches of the amphitheater, the same sun creating a glow around the alleys and little corners of Arles and one can feel the inspiration that created such works as “Sunflowers” plus “Cafe at Night” and “Starry Night” by van Gogh during his time in Arles. 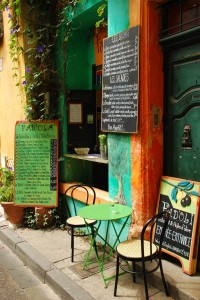 A scene just off the old Roman Forum. Would Vincent have captured this on canvas?

The city is restoring the exterior of the amphitheater and this gives me mixed emotions. I loved the old gray beast that was the old Arles amphitheater. It was falling to pieces in sections but that made it appear all the more ancient and mysterious. Now, entirely new sections of stone have replaced sections which were deemed too decrepit to salvage. It makes sections appear as if they were built yesterday, which in fact, they were. No doubt there were many arguments at city council meetings before this work was carried out. 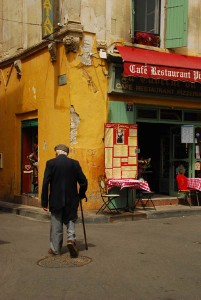 A man walks through the square near the old Roman Forum 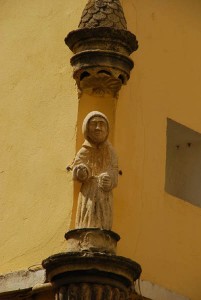 A statue of a pilgrim on the Aragonese Way to Santiago di Compostela, Spain, burial place of St. James. Arles was the starting point for one of the four main routes from France to Santiago. Arles was the more southerly route along the Camino Aragon. 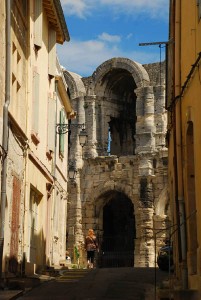