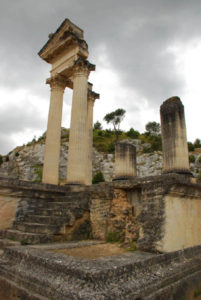 We wandered through the ancient ruins of Glanum today, a site which had been populated as many as 500 years before Christ by people drawn to the area by a sacred spring. We were impressed with the advancements made in architecture and engineering in the span of the 800 year history of Glanum. On the way home, we wondered aloud, “how did they do it then? I mean today, we have history to guide us. What was their guidance?”

It makes me think of what some Americans who have not traveled or if they have, have not truly gotten to know another culture take for granted today in the empire of the USA. Here’s a short list with tongue slightly in cheek:

Ice. It’s in our freezers at home and it’s abundant at every 7-Eleven. It’s cheap. We bought a small bag today at a grocery store in Provence. It cost $3.50 and every single cube is precious.
Cheap fuel. We moan about gas at $4 to $5 a gallon? Ridiculous. The Europeans have been paying $7 – $9 a gallon for years for this finite resource and they plow that tax money into world-class public transportation systems.
Abundant, cheap food available 24 hours a day. In Europe, you have to plan your meals. Many restaurants close one or two days per week. Many have only five or six items on the menu. The average meal? $40 per person. In America, you can eat well (although not healthy) for less than $10.
Plenty of free parking. In Europe, you can circle around and around an ancient town center and not find a place. In any case, you pay through the nose for the privilege of parking.
While on the subject, driving is indeed a privilege. To get a license, you must attend a private school. That costs around $1,200. As a result, Europeans are highly capable, skilled drivers. Yes, they drive fast but that’s because they are able to, safely.
Space. Americans are so spoiled by our huge country that we waste acres of it on nonsense. Two competing grocery store chains with massive parking lots of asphalt facing each other across a busy intersection with a gas station on each corner? This is not only ugly, it’s stupid. In the area of Sarasota where we live, there are no less than five huge grocery stores within one square mile. That’s five huge stores that need to be cooled, lit and stocked.
A common language. You can spend your entire life in America and never learn anything more than English. Most European children grow up learning three or four or more languages. When I was in school, they dropped Spanish because it was “too expensive.” Stupid, stupid and so typical of the American school system. I could have contributed thousands more to the U.S. economy in taxes if I had been able to offer tours in Spain 13 years ago. Just multiply that by the number of students who graduated from LBHS in the 1980s and 1990s. Then, the hundreds of thousands of schools around America who do not offer a second language. We’re falling behind on a massive scale.

Glanum suffered a similar fate. Now it’s just a pile of ruins that people wander through, and wonder. “What happened here?”
When you spend as much time in “Old Europe” as we do, you tend to see things through different lenses. We appreciate the fact that we have the best of both worlds but understand too that each world can learn from the other.

While the Mistral is blowing in Provence….