Bet you said “Alexander Graham Bell,” but you would be only partly correct. In the small provincial town of Gelnhausen, not far from Frankfurt am Main, Germany there is a statue in the market place dedicated to the “Founder of the Telephone,” and his name is not Bell. It is Johann Philipp Reis, and he was born here. According to published accounts, Reis produced a machine in 1860 capable of transmitting sound. The first sentence uttered by this new technology? Read more from Wikipedia:

“The first sentence spoken on it was “Das Pferd frisst keinen Gurkensalat” (the horse doesn’t eat cucumber salad). See Reis’ telephone for a detailed description. The Reis transmitter was a make-break transmitter. That is, a needle attached to a diaphragm was alternately pressed against, and released from a contact as the sound moved the diaphragm. This make-or-break signaling was able to transmit tones, and some vowels, but since it did not follow the analog shape of the sound wave (the contact was pure digital, on or off) it could not transmit consonants, or complex sounds. The Reis transmitter was very difficult to operate, since the relative position of the needle and the contact were critical to the device’s operation at all. This can be called a “telephone”, since it did transmit sounds over distance, but is hardly a telephone in the modern sense, as it failed to transmit a good copy of any supplied sound. Reis’ invention is best known then as the “musical telephone”. In 1863 the device was tested by the British company Standard Telephones and Cables (STC). The results also confirmed it could faintly transmit and receive speech. At the time STC was bidding for a contract with Alexander Graham Bell’s American Telephone and Telegraph Company, and the results were covered up by STC’s chairman Sir Frank Gill to maintain Bell’s reputation.” 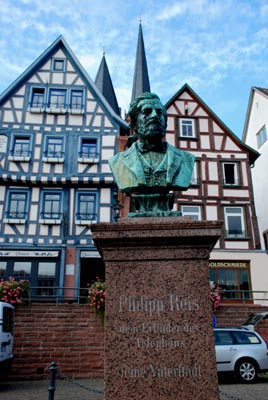 Sorry Phil, but you don’t get the credit for what we call the telephone. Nice statue though!