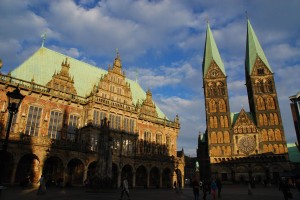 This is where it all started, 25 years ago. Sent on assignment by the European ‘Stars and Stripes’ to Bremerhaven, I saw the sign leading to Bremen as I was zipping down the autobahn. I called my mother from a payphone along the road. ‘Mom, what does Bremen mean to our family?’ She said this is where my German ancestors got on the ship to come to America. (A slight mistake, they actually would have left from Bremerhaven) I had some time and so I walked around Bremen, taking photographs and collecting mementos including a menu from the place where I had lunch, a beer coaster, a leaf from a park. I put all of this together in an album with the photos and gave it to my grandpa at his 80th birthday party in Valley City, North Dakota. The reaction of the family was overwhelming. I thought, ‘this could be a business.’ That started European Focus, a groundbreaking photography research business that resulted in my taking pictures for clients in more than 2,200 locations around Europe from way back then to now. Private tours grew out of that business in 1996, and here we are, a quarter century later, in a hotel right around the corner from this scene that I took in black and white all of those years ago. Many miles have been covered since then, and more to go if I’m lucky.