James just finished a very unique trip with a mother and her 29 year-old son from near Boise, Idaho. When asked where in the world he wanted to go, young Andrew said he wanted to experience the Alps and some of Southern Germany. We worked together on an itinerary which fit in all of the items on his wish list, and on September 23, their trip started with a meeting in lakeside Lugano in the Italian part of Switzerland. Andrew and his mother had already had some alpine adventures in Switzerland and Italy with a friend of Susan’s from her high school days.

On their private tour, we stayed two nights in Venice, a wish list item for Susan. Then we headed north into the stunning Dolomites, two hours north of Venice, for a night at a cozy private hotel with grand views all around. Then we enjoyed a splendid drive north to Berchtesgaden in the far southern corner of Germany for two nights at a spa hotel. From there, we explored nearby Salzburg and Hallstatt. After our two nights in Berchtesgaden we drove via Linz, Austria up into the Bavarian Forest for a night at a brewery hotel, another item on Andrew’s wish list was to try some of Bavaria’s famous beer. We had time in Regensburg for the Roman history and bratwurst at a 14th century kitchen. Then it was Landshut for their last night with a beer at the Augustiner Gasthaus, enjoying a beer which has been produced since 1328.

This trip was designed from scratch, as all of our trips are, specifically around Andrew’s interests.

So, where do you want to go? 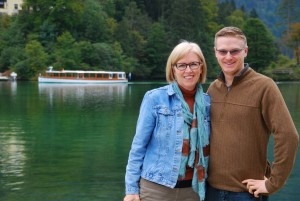 Susan and her son Andrew at the Koenigsee, near Berchtesgaden, Bavaria