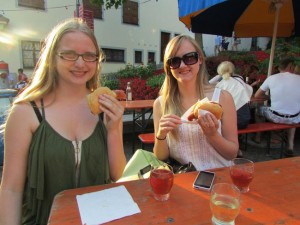 There is nothing like a good old-fashioned wine fest to get you in the mood to celebrate being in Germany. When we arrived in this colorful lakeside town there was one going on, second day, the so-called ‘Adults Day’ when most of those in attendance were behaving themselves because they had to be at work the following morning. We heard from our innkeeper that the night before had been so-called ‘Crazy Day’ with much over imbibing and loudness. Glad we missed it.

A wine fest in Meersburg gives the local cooperative a chance to show off their hard work from the previous year’s pickings. Wines are offered at a very low price, much less than what you would pay in a restaurant. Full bottles can be had for only 9 Euro (about $12) for enjoying at your table, which of course, you share with other celebrants. Simple meals such as flammkuchen (a kind of thin pizza with cream cheese and bacon bits and onion) and brats plus pork steaks on a roll are all to be had for a bargain, as long as you don’t mind eating off paper plates.

Best of all, there’s music. On the evening we went, a band of at least 30 players doing all of the traditional songs which most of the attendees seem to know by heart. Young, old, men, women – no one hesitates to belt out the lines as they link arms and sway back and forth.

A wine fest in Germany is something not to be missed. 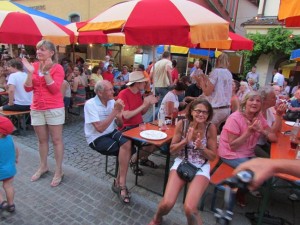 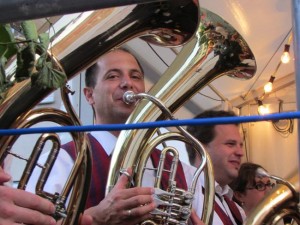