The hamlet of Wallerstein near the larger town of Noerdlingen has an interesting past, having once had a very large castle and many Jewish inhabitants. In fact, the synagogue once stood on the main road passing through town, which was unusual as synagogues were usually tucked away in a distinctly Jewish neighborhood. Unfortunately, the 1970s were not kind of history and the old synagogue was torn down. A bank was built in its place, but sensitive locals at least had the structure built in the same shape and size as the former house of Jewish prayer.

We visited the castle and the brewery located there. Genealogists love to collect things from their ancestral towns, and for Caroline Gries from Denver, this meant beer glasses emblazoned with the name of the town and a photo of the way the town looked back in the 1600s. We found that historical engraving hanging on the wall of the brewery office.

This town has connections with Caroline’s “Weil” and “Wasserman” ancestry. 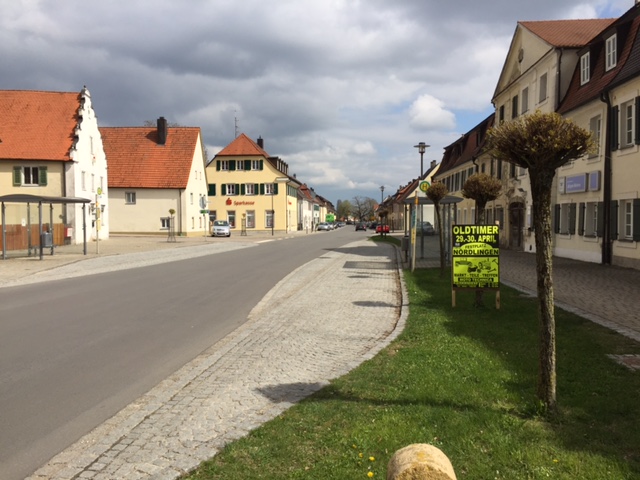 The main road passing through the village, with the former synagogue site at left center. 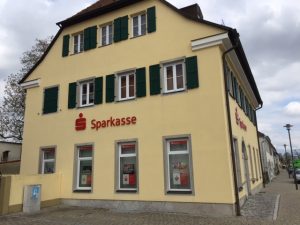 The bank built to resemble the former synagogue 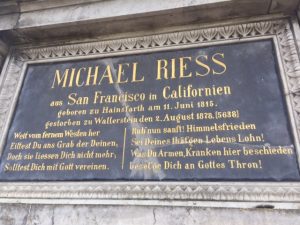 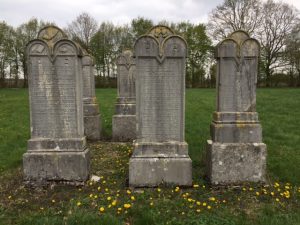 In the cemetery, which we gained access to with the help of one of the village maintenance men. Large headstones are at the graves of some important rabbis from Wallerstein. A wealthy American who came back to Wallerstein and died here is also buried in the most elaborate crypt.