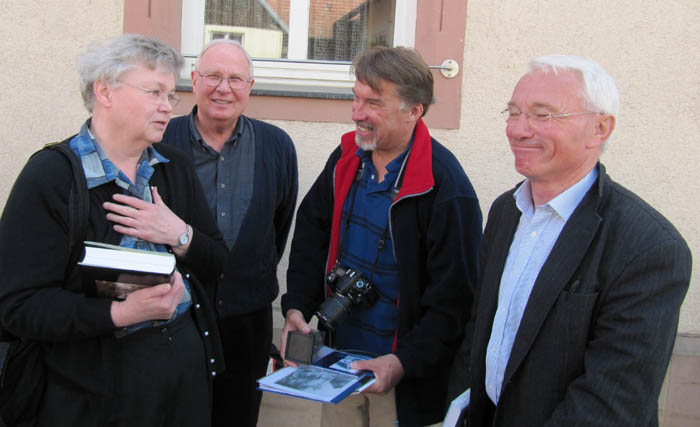 Gini and Bill Packwood’s day in Neupotz was arranged like a military campaign by enthusiastic Burgermeister Emil Heid. He had our schedule, starting at 10, broken down into segments right down to the 15-minutes spent in the tiny local history museum currently located in the attic of the Rathaus. Of course, conversation, questions and just taking it all in broke his carefully-timed schedule almost immediately, but no one seemed to mind. 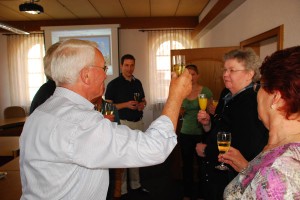 First there was the greeting outside the Gehrlein family restaurant on the main street near the church. We arrived punctually at 10 a.m., a German trait guide James Derheim has picked up through the years. We were warmly greeted by members of the town council including a journalist who writes for the local newspaper. Two translators from the community were standing by to assist James. As one of them said during our reception, “we love to practice our English.” This allowed James to sit back and concentrate on devouring a couple of the loaded sandwiches provided by the town for our “second breakfast.” A toast with local sekt, or German champagne, was followed by an interesting presentation showing many images of the village, tracing its history from pre-Roman times and showing images of the “Alt Rhein,” or the former track of the powerful Rhein River. The river was canalized in the late 19th century and bears no resemblance today to its former twisting, turning self. Gini Packwood was stunned to receive gifts including a comprehensive history book of the village, a glass window decoration with the town crest, a pewter cup, the slide show on DVD plus a detailed history of her family connection to Neupotz.

Then it was time to take a tour through the Heimatmuseum upstairs. This modest collection will be greatly expanded when the town moves into their new museum in August of this year just down the street. It turns out that the new Heimatmuseum is also located in a house connected with Gini’s family. The two sisters that her ancestor married (the first wife died) were born in that house. 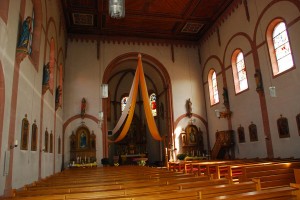 Next was a highlight among many others. We visited the town church, dedicated in 1840. Gini’s ancestor came here to help build the church. Wouldn’t it be interesting to know what his unique mason’s mark was back then? That’s another research project for another day. The church is in original condition with the exception of new benches. The old ones were dark, oak, and full of interesting scroll work. One of the town councilmen told James that “they were beautiful, but placed too close together. The people wanted more separation, so we lost a piece of our history when those benches were done away with.” 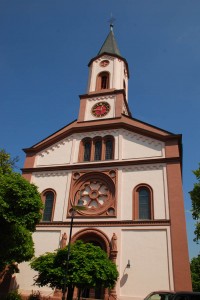 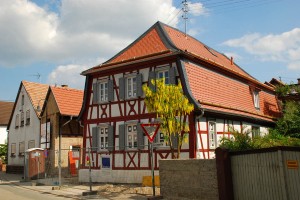 Next was a visit to the future town museum and ancestral house of the Loesch family. The house dates back to the 1500s and is in remarkable condition. The town is spending more than 400,000 Euro on the restoration and expansion of the barn. The state of Rheinland-Pfalz has invested more than 2 million Euro in the restoration of the house and neighboring former milk collection point. Herr Heid told us a story:

“As a little boy it was my job to bring the three or four liters of milk we collected each morning from our cow to the milk station. Of course, some farmers would add a little water to the milk to earn more money. If we saw the control agent at the door of the milk station, we would turn around and go home with our milk rather than get caught.” 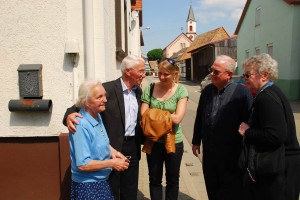 Meeting the organist, 62 years in service and still playing

Next was a stroll to the Oberstadt and along the way, a short introduction to the organist who has played in the church for 62 years. The Burgermeister knows everyone of course in this village of 1,800 souls and so there were plenty of “Hallos” and “Guten Morgens” as we walked through the village.

A brief stop at the town’s big community hall, built on the foundations of a former basket-making factory. was followed by lunch at “Zur Krone,” one of 11 places serving food in this village known throughout the region for its culinary delights. We all had fish and it was delicious. We were running a full hour behind the mayor’s carefully laid out plans, but again, no one seemed stressed about this. We were relaxing and having a great time. “We’re happy people here in Neupotz,” the enthusiastic Herr Heid told us. “We have a fantastic quality of life.” Someone might think the mayor was aiming to gain a few new “burghers” to add to his tax base. 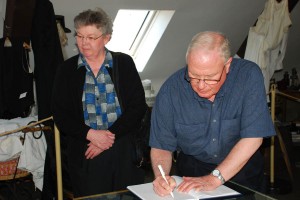 Signing the official guestbook at the town hall museum

After lunch it was a visit to the mayor’s big brother, Karl Heid, who makes baskets the old-fashioned way. After a spin through the countryside to see the “Alt Rhein” and a modern farm it was time to go on to the next appointment. Our day in Neupotz was over. We left behind some gifts for the mayor and for those who helped us, and some newfound friends.