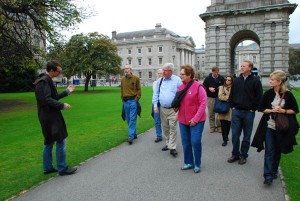 Getting a tour from post-post-post graduate student Jamie, left, who admits to a decade long study course at Trinity College, Dublin

Downtown Dublin’s Trinity College campus sprawls over more than 44 acres of prime real estate. But, the casual visitor only sees about twenty square feet of this space, and that is what is surrounding the famous “Book of Kells,” kept in the campus library near the main entrance just off of Grafton Street. 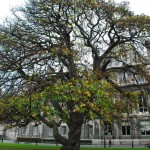 When entering through that vaulted doorway, one of the first students you’ll probably meet Jamie, a perennial student who bashfully admits that he’s now in his 10th year at Trinity. Founder Queen Elizabeth I would be proud. After all, Jamie is helping to spread the word of history to tourists from around the world. Not exactly the queen’s intentions back in 1592, when she established Trinity as the “College of the Holy and Undivided Trinity of Queen Elizabeth near Dublin” as an outpost of Anglican learning in a sea of Catholicism. 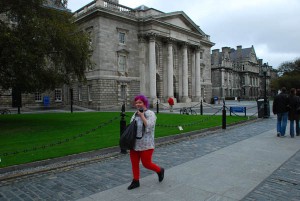 A lucky student from the EU can attend Trinity for around 2,000 Euro per year. Orange hair costs extra.

The college did not admit women until the year 1904. Provost George Salmon has said that women would be admitted “over my dead body,” well, it seems that he obliged because a few weeks after the first woman walked onto campus as a student he died of a heart attack. A statue of the man occupies the front square of the campus, put there in honor of his large posthumous donation. 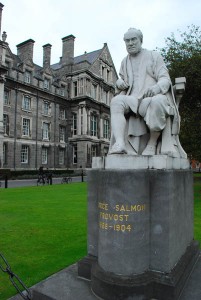 Provost Salmon was opposed to women attending Trinity right up to when he keeled over from a heart attack, three weeks after women were admitted in 1904, more than three hundred years after the university was founded.

We learned from Jamie that students from the university grabbed some seeds from an Oregon Maple and smuggled them back to the campus, planting them in the yard where they sprouted and grew into two of the largest known Oregon Maples in Europe. Across the way is the library, a legal depository of 4.5 million volumes arranged not by the Dewey decimal system or by subject, but by the size of the book. In the reading room is Ireland’s oldest harp, dating back to at least the 1200s. Downstairs, the famous Book of Kells, Ireland’s finest illuminated manuscript, kept here since 1963. 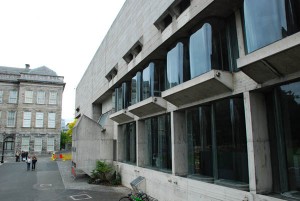 The 1970s were NOT a good time for classic architecture.

Jamie pointed out the winner of the 1970 architectural prize, a building students refer to as the “Giant Xerox Machine.” It’s so ugly and seems terribly out of place amongst the 18th and 19th century buildings around it. However, it seems the prize was sponsored by the Irish concrete association. At least, that’s what Jamie claims.

The ticket just to get into the Book of Kells is nine Euro. Jamie’s 45-minute long tour cost 10 Euro, including the entrance to the library. We were astounded that this wonderful experience cost exactly one Euro per person.