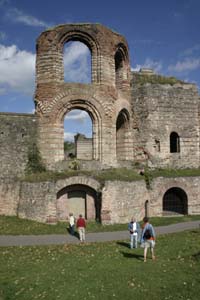 The Romans extended their empire all the way into England and this is well known. What is not so well known is that the capital of the empire north of the Alps (not counting England) was Treverum, later known as Trier, Germany’s oldest city at more than 2,000 years.

Trier boasts a wealth of excellent Roman remains. The cathedral started as a Roman palace. The baths are well preserved and one of those, the Kaiserthermen, or Emperor’s Baths is pictured above. A splendid Roman gate stands at the eastern side of the downtown area. Perhaps the most impressive structure of all is the former Basilica, used as an audience chamber and the place where Constantine was crowned emperor. A stadium which could seat up to 20,000 spectators stands at the edge of town. It is still in a perfect oval shape and one can go down into the lower areas where the wild animals were kept. (Slaves too, for later gruesome entertainment)

Trier is a place we love to take our guests for a little bit of old Rome in Germany.