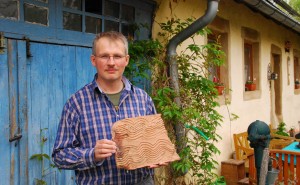 Roland Geiger holds a tile nearly 2,000 years old found in the parking lot of his home in St. Wendel, Germany.

I was invited to have dinner with Roland and Anne Geiger recently. As we sat in their cozy dining room heated by a wood-burning stove with our nostrils being savagely attacked by the wonderful smells coming out of the kitchen behind the wall, Roland entertained me with stories of what he has found on the property. More than once my mouth fell open, and it was not just from hunger. It was excitement at the thought that we were sitting on top of more than 2,000 years of history.

Roland casually pointed out a broken but still useful pot in the corner. ‘Used for cooking meat,’ he explained. They found animal bones and rocks inside. It now serves as a planter. He brought out a tile with wiggles scratched into its surface. ‘This was used to hold plaster,’ he explained. The Romans made these square tiles and attached them to the walls of houses with a concrete mix. Then they plastered over the wiggles, and the wiggles held the plaster in place. This ingenious system is copied today all over Europe with wallpaper that acts as an adhesive for paint. 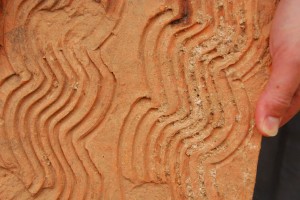 Holding a Roman invention for applying plaster to a wall so that it would stick.

But the most valuable thing in Roland’s collection, his ‘precious,’ is a broken tile in two parts with a faint etching on it. It could be a name. Yes, it probably is a name. ‘S, and then a very old e, the kind of letter used in the capital until about the year 1 and then in the provinces until around the year 100 AD,’ Roland pointed out as the wind was sucked out of my lungs by the thought that I was holding a piece of history in my not quite steady hands. ‘Then we have here a v, an i and an r and another i.’ The name ‘Seviri’ etched into the tile by the tile maker who needed to keep track of who had ordered which stack of tiles. Like attaching a sticky note, except one made with materials on hand. For this tile maker, it was a tile. 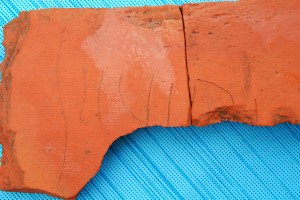 Roland sent images of the tile into the ether and soon had an answer from a professor in Madrid, who confirmed the purpose of the tile and the age.

Later Roland took me up into his barn where there are boxes and boxes of finds, many of them absolute treasures to the history nut. More fragments of the wiggly wall tiles. Pottery fragments from Roman and medieval times. All found in his garden, his parking lot, below his 17th century house which itself is a treasure worthy of another story. 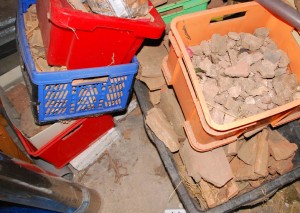 Just a bunch of Roman stuff. Really? The heart starts to beat when one sees boxes of fragments of history in the attic of the Geiger home.

Fittingly, Roland Geiger is an accomplished genealogist and excellent researcher who has helped many of our clients dig deeper into their family histories in the Saarland as well as in Rheinland Pfalz and surrounding areas of Germany.
Roland can be reached at rolgeiger@aol.com or through his web site at www.hfrg.com