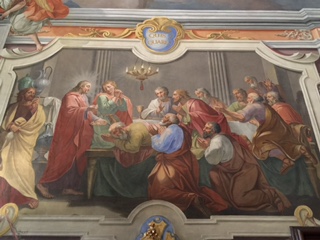 This depiction of the Last Supper is the only one in the world which shows Jesus at the head of the table with disciples kneeling in front of him.

With almost a divine intervention, the beautiful sacristy of the Augustinian Monastery was spared the destruction of Soviet bombing late in the Second World War. The ceiling frescoes were painted by artist J.C. Hackhofer during 1716. He and the other artists in his workshop did the Last Judgment and also the Last Supper on the walls of the private chamber for the priests of the monastery (at one time there were about 50 in residence, during the Protestant Reformation there was only one and now there are five). The entire back wall is covered in a horrific depiction of the descent into hell, with larger than life figures being tortured and prodded on their way down into the depths. 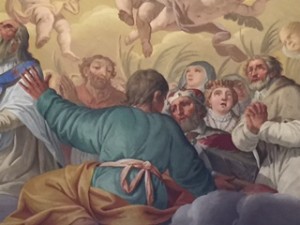 The artist J.C. Hackhofer showing his patrons the scenes of the sacristy. It is unusual for an artist to incorporate himself into a fresco.

Scenes from the Last Judgment are arranged below. 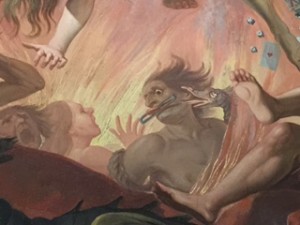 The person shown here has a large clip on their tongue. Their sin? Gossip. 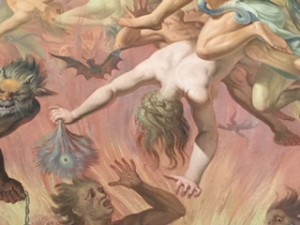 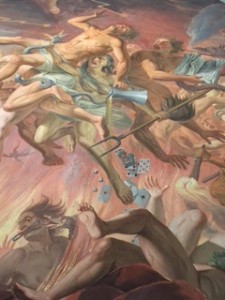 Look at the playing cards falling from this sinner’s hands. Gambling will send you to hell. 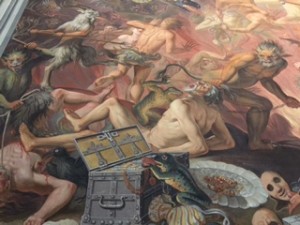 The sin of greed is portrayed by the money chest at lower center and the person being dragged into hell.