(James and Jenean Derheim are scouting new locations for future tours in southern Spain, on their way to pick up returning clients in Lisbon on May 27)

Resting and recuperating with the sound of birds coming from the garden after a series of very long drives of 600, 700 and 850 kilometers on May 23, 22 and 19 we are now lodged in a gorgeous little B&B down below Ronda, Spain. The place is so peaceful that after checking in and before we even saw our room we immediately extended our stay by a night, gladly paying the penalty of a night’s stay at the place where we were originally scheduled to stay the following night near Cordoba. Our new van needs a rest. So do its drivers. 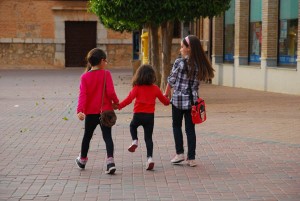 Watching the locals in Consuegra as dinnertime (8:30 is the earliest possible) approaches

The past couple of days have been filled with incredible sights. Spain is truly “Big Sky Country.” I thought that was the motto of Montana, but I think they stole it from Spain. Huge vistas, limitless horizons, rolling plains, mountains and through it all, a  nearly empty highway that is empty either because of the crashed Spanish economy or perhaps it’s just luck. I think the former has much to do with it. We roll past blocks of highrises that are not finished. Empty storefronts in all of the small towns and villages. Quiet, so quiet. The exception was on May 23 when we attempted to get close to the Alhambra in Granada. Horrible place, Granada. Ruined by development, the Alhambra invisible behind all of the high rises. The hillsides below the soaring Sierra Nevada range are blanketed with awful condos, most of them shuttered and empty. We get near the Alhambra, through all of the tourist dreck and then just at the last minute I miss the poorly-marked turn for the Parador that we had intended to check out. Tourists, taxis, buses, cars, schlock everywhere. What has happened to the Alhambra that I remember so fondly from my journalism days in the early 1990s? It’s been covered up by crap. We vow to never return. 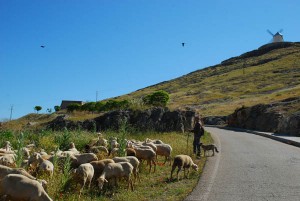 A shepherd high above Consuegra

On down the road on this long day we remember where we started, in La Mancha, the small, lonely town of Consuegra. If Spain has an economic cold, then this little dusty town has the flu. A dozen white windmills and a huge 11th century castle dominate the town and yet the busloads of tourists who roll in from Toledo or Madrid or wherever don’t stop and spend anything in town, and it shows. Many, many empty shops and closed up businesses. There is one little bar in the town center and the owner and his two buddies are engrossed in a bullfight on the big linen screen while Jenean and I get a drink and a snack. Jenean averts her eyes. She can’t stand the bloodshed. I watch, fascinated by the pageantry. I’ve been to a few bullfights in the past and don’t care if I go again. I suppose most people are rooting for the bull. The matadors, all gussied up and pomped, strut around in their skin-tight purple knee-length pants, not knowing that leggings are out of style in America. That evening, after a delicious meal of tapas at a bar called Gaudi, we walk back through empty streets to our inn, a lovely little B&B we discovered. It seems that tonight we are the only ones who did discover it, and we have the place to ourselves. Above, the windmills are catching the last of the sunset. Invigorated by the sight, I dash up the hill and breathless from the altitude and the effort, take a series of shots that may or may not be in focus. The wind is blowing and even though the mills are tied down, I can imagine the creaking sound of their wooden sails turning in the wind, grinding grain high above this arid plain. 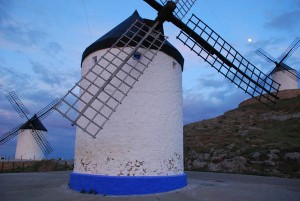 Three of the twelve windmills above Consuegra