, English: Palace of Catalan Music) is a concert hall in Barcelona. Designed in the Catalan modernista style by the Barcelona’s classic concert hall by architect Lluís Domènech i Montaner, it was built between 1905 and 1908 for the Orfeó Català, a choral society founded in 1891 that was a leading force in the Catalan cultural movement that came to be known as the Renaixença (Catalan Rebirth) (Benton 1986, 56; Fahr-Becker 2004, 199). It was inaugurated February 9, 1908. The project was financed primarily by the society, but important financial contributions also were made by Barcelona\’s wealthy industrialists and bourgeoisie. The Palau won the architect an award from the Barcelona City Council in 1909, given to the best building built during the previous year. Between 1982 and 1989, the building underwent extensive restoration, remodeling, and extension under the direction of architects Oscar Tusquets and Carles Díaz (Carandell et al. 2006, 138). In 1997, the Palau de la Música Catalana was declared a UNESCO World Heritage Site along with Hospital de Sant Pau. Today, more than half a million people a year attend musical performances in the Palau that range from symphonic and chamber music to jazz and Cançó (Catalan song). 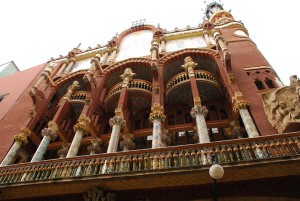