We took the interesting tour of the Henri Maes “Halve Mann” brewery in Bruges the other day and found it a fascinating look into how one of the more than 35 breweries that used to exist in this small Flemish town operated. Our guide, Ian, was the highlight of the day as he described with great sense of humor how men “dressed in their nakedness” would work in sweltering conditions to make beer for the consumption of, at first, the locals only.

As refridgeration and enhanced bottling techniques became available, Henri Maes started sending their beer further afield. Today, with several gold medals under his belt, the Xavier Vannestes, the sixth generation of the Henri Maes family, is busy exporting some of the more than 4.5 million liters produced each year to America among other countries. The Straffe Hendrik Quadruple recently won a gold medal in an Australian beer competition.

It was interesting to learn that the brewery nearly folded in the early 1970s when supermarkets came into being in this part of Belgium. Home delivery was no longer needed and this was one of the brewery’s biggest sources of income. A decade later and the 5th generation of the Maes family came up with a couple of very successful brews, saving the company from total ruin.

We did our best while in Bruges to consume as much of the Henri Maes brew as possible. 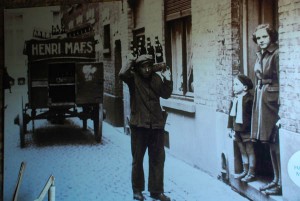 The young boy at right looks very interested in the beer delivered to your front doorstep concept in Bruges, Belgium