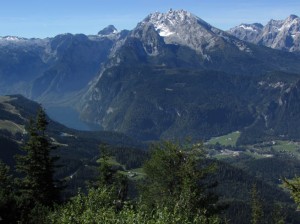 Want to cool off at night in Germany? Open your window. The cool night air will sometimes cause you to want an extra blanket. Very few mosquitoes make open windows the common way to ‘air condition’ a room in central Europe

After a one night stay that just happened to be in the middle of a heat wave in one of our favorite alpine hotels near Berchtesgaden last July I was compelled by comments made by my clients to write an impassioned letter to the owner, asking if he would someday (soon) install air-conditioning in this four star superior-rated hotel surrounded by majestic mountains.

After getting no reply and after seeing the owner now four or five times around the property on our current stay, I have come to the conclusion that A: He never got the e-mail or B: The staff deleted it, knowing that it would do no good or C: He got the e-mail and is saving me the embarrassment of him having to tell me that ‘James, we don’t have air-conditioning because it is hot in Berchtesgaden about ten days out of the 345 that we are open.’

A/C, just one of the hundreds of things that Americans take for granted. Sort of like 24 hour a day shopping, 389 channels on the TV, a grocery store on every corner and cheap gas. In Europe, A/C is just not available. Wait, in the cars. Then it’s available. But in offices, shopping centers, hotels, restaurants and most public and private places, no A/C. What, are the Europeans just gluttons for punishment? No, they are just very slow to change. Glacially slow. And climate change, while very real, has not caused a shift in their inbred distaste for artificially cooled air.

Yes, you will see Europeans fanning themselves when it is hot and you will hear them complain. But to solve nature’s blasts of hot air with a big fat energy bill and by pumping more gases into the atmosphere is not their way. Energy in Europe is about four times as expensive as in the most expensive parts of the USA. And Europeans have been told since they were two that sleeping in an artificially cooled room is gonna make them sick. Just like drinking an overly cold drink. That is why you don’t get ice cubes in Europe. That’s another blog.

And so, when we have guests who request A/C we have to try and explain all of the reasons why it is not available. Or at least, not available in any hotel with more than a little charm. Must have A/C addicts can stay in a chain hotel with all of the character of a shoebox, but they won’t know they are in Europe unless they turn on the TV and see a bunch of channels in a foreign language. We like our guests to wake up and know they are in Germany, or France, or Belgium.

Americans who have grown up with abundant, cheap energy in hermetically sealed homes and abundant, sometimes freezing A/C (do you wear a sweater to go grocery shopping in the summer too?) cannot understand it. To put it short, if you are addicted to A/C, stay home in your A/C and watch European travel shows on DVD. The Europeans aren’t changing anytime soon. Not even if those ten days of 90-plus temps stretch to 20.

I would like to share a brief comment regarding your post titled ‘Sure Europe has Air-Conditioning. It’s Called ‘Open The Window’
Being both French and a professional of the AC industry, I can only confirm how finely you have observed us, well done!
My colleagues usually come back from their US trips with a cold, complaining that it was absolutely freezing over there (even in mid-August…) 🙂