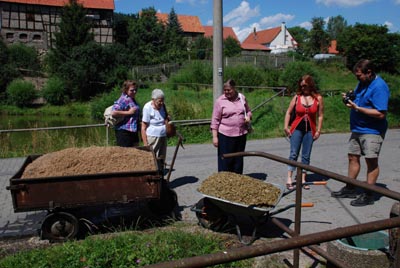 We discovered this hidden gem in the Thuringen Forest late in July. The hamlet of Singen, near Ilmenau (south of Erfurt) is home to the Schmitt Brauerei, the last of its kind in Germany. The little brewery pumps out 100,000 liters of beer in a year, which puts it in the camp of microbreweries. What makes Schmitt special is that for almost 100 years, the machinery and methods have not changed. They’re making beer the old-fashioned way and man, it does go down good. We sampled the golden pilsner in the local Gasthaus, which by the way, has great schnitzel and Thuringer wurst. 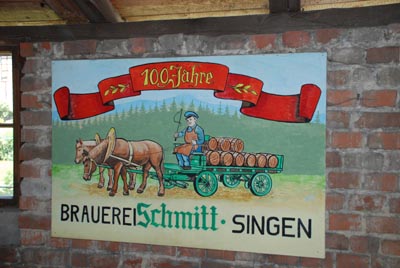 The smallest brewery in Germany

Getting there was not easy thanks to a rabbit’s warren of detours. We bounced from one village to another in search of little Singen. At one stop (for shopping) we asked the owner about the little brewery and the chance of getting a guided tour. “Well, it might be possible but the brewer is a little odd,” the man said. “If he is in a good mood, you might see something.” Undeterred, we caravaned in our two vehicles over hills and through villages and a postcard perfect landscape until suddenly we saw the sign, “Singen, 2 k!”

First order of business was lunch, at the little Gasthaus in the heart of the pretty village. Most of us had the traditional sausage, served with tasty potato salad. Some had the schnitzel, which was proclaimed Absolutely Excellent. The cheese soup wasn’t what our guest expected but a taste test by the author grades this a solid “A.” 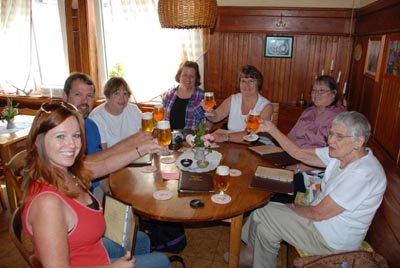 The brewery tour almost wasn’t. We met the brewer, who was every bit as cantankerous as we had been warned. He basically ignored us and went about his business, which today was washing out barrels. We hung around the shed, which was full of picnic tables and showed the signs of recent parties. It’s not hard to imagine the entire village population of around 500 souls in the barn and in the beer garden, swilling down the local product with pride. After a wait of about 20 minutes, the sister showed up. Brother Brewer had obviously called her, letting her know there was a small group of crazy Americans waiting to purchase Schmitt Brauerei souvenirs. The sister turned out to have the opposite personality of her brother (meaning she had one!) and as a bonus, her English was pretty good, too.

Members of our group purchased a few kilos worth of beer mugs, glasses and other memorabilia. It was enough to get us a free and excellent tour of the brewery. We learned that the place survived Communism more or less intact, and remained in private hands (where it’s been since it was founded in 1875) which is sort of a minor miracle. Most businesses were surrendered to the state when WWII ended and the Russians took over this part of Germany.

We saw the cold storage area, brrrrr! It’s dug deep into the natural rock at the back of the brewery. And, we learned that little villages in this part of Germany have a pond for two reasons. The first is for a water supply in case of fire. The second is that the pond is the source of ice, cut in the winter and stored in sawdust in the cave behind the brewery. Drive through these villages in Eastern Germany and if you see a pond there is a good chance there’s a cave or deep cellar nearby. 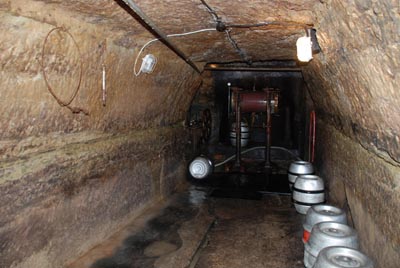 We will return to Singen, the sooner the better!