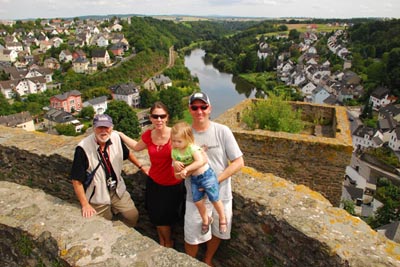 James, Tricia, Hans and Elana Rosenwinkel atop one of the castle towers

We stopped to visit Runkel Castle on the 31st of July on our way between the Rhein Valley and Hameln. This fascinating castle is one of our favorites in Germany, because it is relatively unknown and fun for all ages to explore. A historical timeline follows, with thanks to the official town web site. (Not edited)

Runkel Castle has been built to safeguard the Lahn crossing and has been extended several times. It was first mentioned in an historical document dated 1159 with Siegfried von Runkel. In his function as a trustee of the Reich, he might be responsible for the construction of Runkel. Probably Runkel was founded by the emperor Friedrich Barbarossa. In the year 1634 the palace had been destroyed by Croatian troops of count Isolani and wasn’t rebuilt again

In about 1250 a quarrel started in the family, which ended in the expulsion of Heinrich by Siegfried of Runkel. In the consequent Heinrich sets up Schadeck Castle as a defiance on the opposite of Runkel. It was first mentioned 1288. The history of Runkel and its castle is wild-motioned and feudful, as the following extract will show:

In the year 1288 the families Runkel and Westerburg finally and definitvely divided. 1315 Dietrich von Runkel is mentioned. Dietrich, the third of its name, takes 1376 posession of the Zehnten (tithes?) Schupbach and Aumenau and gives order to build the palace beside the castle.

1440
the Lahn-Bridge is being build, but couldn’t completed until 1448, because of a quarrel with count Reinhard von Westerburg.

1543
Melanchthon, Luther’s friend and helper, is guest of Johann IV von Wied (a nephew of the archbishop Hermann of Cologne) at Runkel palace. 1568 the reformation was introduced to Runkel.

1622
Sovereign count Hermann II was expulsed of palace and reign at 9th of September in a brawl by his younger brother Philipp Ludwig, who ment to been set back at the inheritance.

1634
Runkel’s most disasterous day in the Thirty Year’s War was the 15th of October. The croatians of count Isolani climbed over the walls of the village and burned down the place including its ancient palace.

1719
Runkel was occupied by Hannover,

1796
Troops of Darmstadt threw out the French in a nightly street-fight.

1806
the right-sided part of the government Runkel and also the belonging part of the village was attached to the new, by Napoleon created, grand duchy Berg.