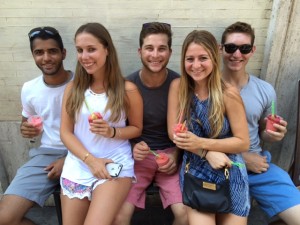 Five young adults from the east coast of Florida enjoyed a 20-day trip with James in 2015. This “Grand Tour” was in celebration of their graduation and impending journey on to university. Here’s the group in San Gimignano enjoying gelato. Among the cities visited were Amsterdam, Berlin, Prague, Munich, Rome.

About a third of all of the trips we led in 2014 and 2015 were booked in the month of January, as people’s minds and hearts start to turn to travel and adventure. With the busy holiday season behind us, we can now focus on “where are we going to go?”

European Focus has turned the concept of guided touring completely on its head. We’ve been doing this since 1989. Rather than just throw out a bunch of pre-planned, pre-packaged and mass interest tours, we design each and every tour (we’ve done 266 since our founding) around the interests of our clients.

What is a “Small Group Tour” for us? Two! That’s right. Two persons. Usually a couple, or cousins, or friends. We have led groups of up to 17 (Grandma and her entire crew) and we have done many solo tours as well. We fill a niche in the travel market, and we are the original “By Design” travel coordinators and guides. It was a concept dreamt up by company owner James Derheim one day while he was cruising down the autobahn in Northern Germany, on his way to an assignment for the newspaper where he worked at the time. He passed a tour bus full of unhappy-looking people and thought, “there has to be a better way.”

You risk nothing by reaching out to us today. We never add you to an annoying mailing list, and you won’t receive any communication from us if you decide that what we offer is just not for you. What do you lose by asking for a quote, other than a few minutes of your time?

Please start on your road to adventure today, before our schedule for the new year becomes full. We only take 12 to 14 “groups” per year. And remember, a “group” for European Focus can be just two persons.