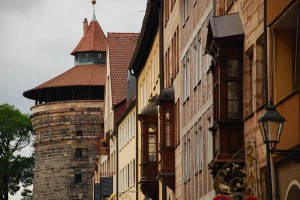 When Nurnberg changed from a Catholic city to a Protestant one (a decision made by the ruler in the 1500s) there was a problem. People still wanted to pray at home, even if they were now using a different method than before. So, they asked for permission to build small alcoves onto their houses, projecting out from the exterior wall. This was their place of silence and prayer. The tradition spread to the point where now the city center boasts more than 100 of these little wooden alcoves. The best part is, if you move, you can take the alcove with you. It’s fully detachable and can be affixed to the new home.
Posted in Family History Tours, Germany Tours and tagged chapel windows, nurnberg.